A Misconception Believed by Millions

Despite widespread government and central bank intervention in the financial markets, price action in the dollar index and commodities show that long-standing relationships are still just as reliable today as ever before.

While stories about a “new era” of trading and investing have been common in the press and on the Internet over the past couple of years, we disagree with their logic. While we certainly are in an economic environment where central bankers wield much influence, we feel that “this time” is really no different than any other market cycle that has played out over the previous 75 years. It still comes down to money and human behavior, and we don’t see that changing anytime soon.

“This time is different” has become a common theme in market discussions, with many analysts exhibiting the fervor of revival ministers on a Sunday pulpit. While it may be entertaining to hear TV and Internet personalities take on the intent behind central bank, corporate, and political activities, the real question is whether we are gleaning more or less definition and any real benefit from it?

Rather than trying to connect the dots based on cause, which will almost always be subjective, we find it easier to analyze price behavior from the more objective angle and looking at price behavior first.

In Figure 1 below, we see a monthly chart of the US dollar index going back nearly 30 years:

The lower panel is an Average True Range (ATR) indicator, which gauges volatility, or the rate of change, from one month to the next. When we see historical price action and the effect of economic activity, minus the analytic assumptions of why price did what it did, forecasting what price will do next becomes less subjective and more intuitive.

What stands out on the chart is that price is not moving any differently over the last couple years than it has in previous cycles. Based on the ATR indicator, it is not any more or less volatile, and it continues to move both up and down, which is a hallmark of a healthy market.

A Cycle Is a Cycle

This is because the US dollar is the world’s reserve currency, meaning the majority of global assets and commodities are priced in dollars to make transactions easier. Therefore, when we see stronger economic growth and the demand for food, energy, and building materials increases, it takes more dollars to buy those products. That indicates dollar weakness, but when global growth contracts and demand for commodities goes down, the dollar strengthens.

This cycle between stronger global growth and a weaker dollar has been around for as far back as the charts go, and probably much longer. It is simple to understand that in good times, the majority of people have money and money is cheap, and in bad times, people have less and money is scarce and more expensive.

This relationship can be seen below in Figure 2, which shows the US dollar index and copper prices: 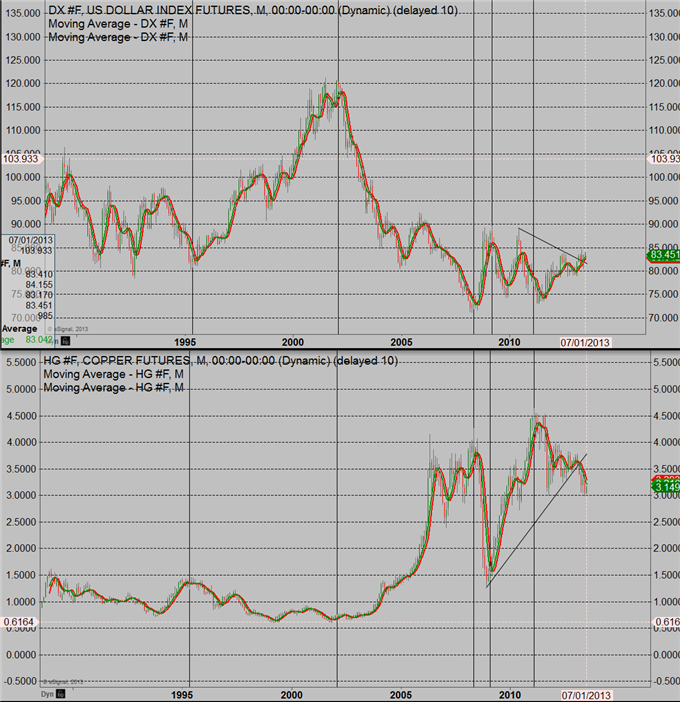 The top pane shows the US dollar index, while the graph in the lower pane represents the price of copper, a basic building product. Copper is widely used in everything from piping to cookwear, automotive products and machinery, wiring, and even for art and jewelry, but particularly as a building product, which makes it a proxy for the global economy. During good times, the world consumes a lot of copper, while demand slackens during tougher times.

The inverse relationship between the two markets becomes more obvious when we draw a line marking the lows in the dollar index and see how they align with the highs in copper. When cash is dear, copper is cheap because of low demand; when cash is cheap, copper is dear because of expansion and demand.

Given that this cycle has been in place for as far back as the chart goes, and much, much further, why should we think “this time” is different?

One reason analysts are saying “this time is different” is because they don’t believe that the Federal Reserve can actually stimulate economic demand by dropping borrowing costs and buying up Treasuries to keep long-term rates low.

In mid-2009, we had our doubts that the American Reinvestment and Recovery Act could stimulate the economy in time to prevent an even further meltdown in currencies and stock prices and a further collapse in consumer confidence. Because we follow price, however, and understand that just as a cycle is a cycle, and a bullish pattern in a market is a bullish pattern, we were able to adjust our bearish mindset and replace it with a bullish mindset in line with actual market behavior by the fall of 2009.

Based on price behavior and the simple measure of whether the market going up or down, we came to the realization that whether or not demand is government manufactured, it still moves price. Our job as traders is not to predict what price will do next, but to move along with where price is going at the time.

The one thing almost all analysts agree on today is that going forward, the markets are closer to the end of quantitative easing (QE) than the beginning, and it may take years to for the global economy to expand on its own and achieve the growth we saw in the previous two decades.

Fed Chairman Ben Bernanke is also quick to point out that if growth should falter, the Fed will step up its bond-buying programs to ensure US homeowners and new buyers can continue to refinance or buy homes at affordable rates. The consensus among all analysts is that we will continue to see slow growth, and we agree.

For our money, the concern that this business cycle somehow is different because of the role the government played with massive stimulus just does not add up. For traders, it is only about the bottom line of our account at the end of the month of end of the year.

In our view, the previous few years were a great example of how markets create patterns that are absolutely a reflection of underlying fundamentals, which, in turn, create long-term cycles. The commodity and foreign exchange cycle ran its bull course, with the last leg up culminating with quantitative easing (QE). Now it's time for the US dollar cycle (see Figure 1) to run its bull course while commodities fade in a slower-growth environment.