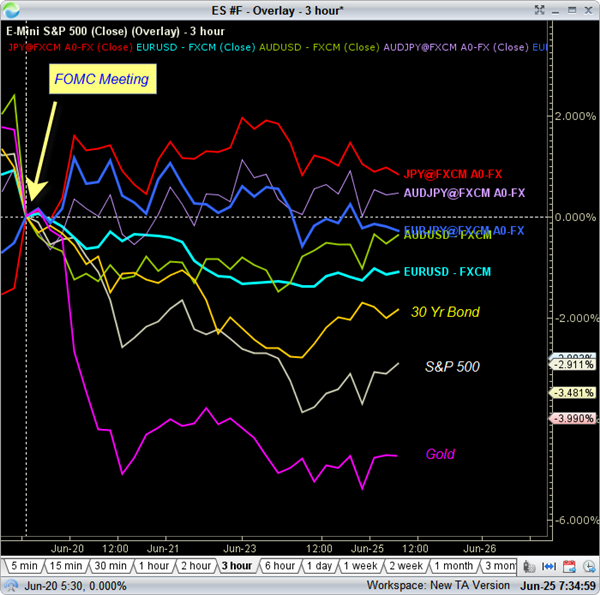 A USD/JPY Set-up with Macro Forces Behind it

A clear Elliott Wave support channel as well as confirmation from a host of correlated asset classes point to a promising long trade set-up in the USDJPY currency pair.

Good morning, traders! As I do before every trade, let’s look at the cross-asset-class report card known as intermarket analysis. Many times, the most perfect technical set-up can be doomed even before the trade begins if you’re not aware of conflicting signals in related asset classes.

Our goal here is first to determine a prevailing risk-on or risk-off theme by observing the trends in these key risk-sensitive markets. Once we have determined a prevailing global macro risk trend, we then begin to rank the strongest and weakest asset classes in order to gauge the leaders and laggards.

Upon completion of this analysis, we will become aware of asset classes that will impact the course of our trade in the currency markets.

Following the Fed’s announcement, we see at the bottom of the chart gold, the S&P 500, and 30-year bonds. Both gold and stocks have been falling quite sharply following Fed Chairman Ben Bernanke’s suggestion that bond purchases will wind down in late ’13 or early ’14. It makes sense to see bonds lower in anticipation of Fed tapering.

Gold trading on the lows confirms the bond selloff considering that the Fed’s credit creation to buy these bonds was the main reason for gold on the trek to $2,000 in the first place. Stocks have fallen in reaction to Fed tapering due to expectations that interest rates will now have room to move higher.

The question that’s now on the minds of many is whether higher interest rates (borrowing costs) will choke off the fragile economic recovery? For us, however, that’s a question for another time.

As it pertains to the currency market, we should expect to see a strong bid in the US dollar (USD) on the heels of this fall in the bond market. The reasoning behind this is because falling bonds result in higher US interest rates, which act as a magnet for international capital flows.

For example, German ten-year bonds earn about 1.7%, as compared to 2.5% in US ten-year bonds. It goes without saying that investors will prefer to park their capital in the US given these conditions.

As you can see at the very top of the IMA percentage-change chart, USDJPY (in red) is the strongest, which makes perfect sense. The USD bid courtesy of falling bonds and rising interest rates is being best-expressed against the Japanese yen (JPY).

Moreover, the Bank of Japan (BoJ) is trying its hardest to ramp up its own quantitative easing (QE) efforts to weaken the yen, which also appears in agreement with our long USDJPY trade idea.

As shown below, the three-hour chart for USDJPY is approaching uptrend channel support in a clean, five-wave Elliott uptrend. The green 100% Fibonacci ratio is a price comparison of the same-degree blue-wave low (ii) on June 17. The second and fourth waves both traveled approximately 190 pips, thus showing awesome proportionality. 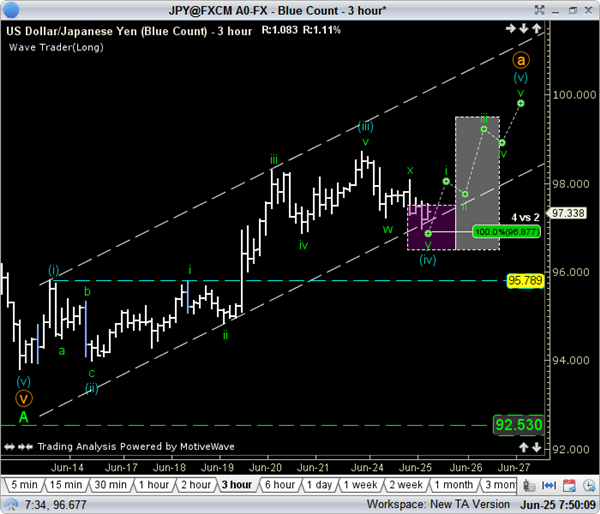 This our Wave Trader System, which scans for one of five specific reversal-trade signals in the purple zone. Then, within the gray box, we will scan for one of four specific continuation triggers once the trade begins to work out.

Those looking to buy this zone could do so at current levels of 97.33 with stops below the wave count invalidation (wave (2) high) at 95.78. Initial upside take-profit is the even 100 level.

While this trade is occurring, continue to watch the falling bond market, falling gold, and higher interest rates to confirm your trade is the right one.

As you can see, intermarket analysis can be a powerful tool for filtering trade set-ups while reducing much of the subjectivity of Elliott Wave Theory.

Best of luck, and as always, remember, “Plan your trade, and trade your plan!”

By Todd Gordon of TradingAnalysis.com