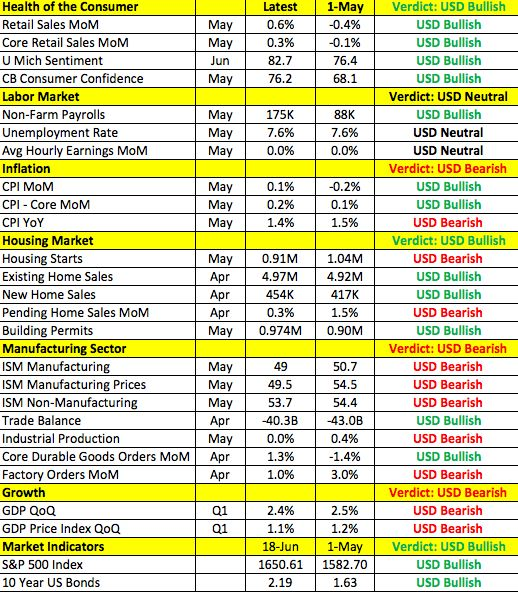 While speculation regarding Wednesday’s Fed policy decision is running rampant, there appear to be two most likely outcomes, and the US dollar’s near-term future is dependent upon which one becomes reality.

The Federal Reserve will be making one of its special quarterly monetary policy announcements on Wednesday, and based on the price action of the currency, equity, and bond markets, there is very little consensus on what is expected from the central bank.

While no one expects the Fed to cut interest rates or alter its asset-purchase program this week, there's a lot of confusion on what Fed Chairman Ben Bernanke might say about monetary policy intentions going forward.

Based on the rally in US stocks, equity traders don't expect Bernanke to sound overly eager about tapering asset purchases. Furthermore, bond traders, who initially drove bond yields above 2.2%, changed their minds as Tuesday’s session progressed.

While there are a number of potential scenarios for the event, we are focusing on two key possibilities:

1) If Bernanke says tapering does not equal tightening but makes it unambiguously clear that the Fed plans to vary the amount of bonds purchased under its quantitative easing (QE) program later this year, the dollar should rise.

2) If Bernanke stays on the fence and spends more time distinguishing the difference between tapering and tightening, the dollar should sell off, as this would suggest that the Fed's eagerness to adjust asset purchases has weakened.

Based on the rise in bond yields and the volatility in the Treasury market in general, Bernanke may opt to err on the side caution and give the market as little guidance as possible. Since the central bank last met, ten-year Treasury yields increased 50 basis points (bps) from 1.63% to 2.2%. The performance of the US economy has also been mixed since then.

The following table shows how the US economy has changed since May 1:

Guest Commentary: US Economic Activity Since May 1

Overall, consumer spending has improved and job growth accelerated, but inflation ticked higher on the consumer level and manufacturing plus service sector activity slowed. US housing market activity is also mixed, and taken together, these reports show an uneven but continued recovery in the US economy.

This is part of the reason why the Fed is expected to lower its GDP forecasts. For the central bank, the pullback in service and manufacturing activity is another reason why Bernanke may want to avoid fueling expectations for Fed tapering, and by extension, drive yields even higher.

So, while a number of Fed policymakers have said the central bank could taper asset purchases in a few months, the stronger message could be that monetary policy will nonetheless remain “extremely accommodative.”