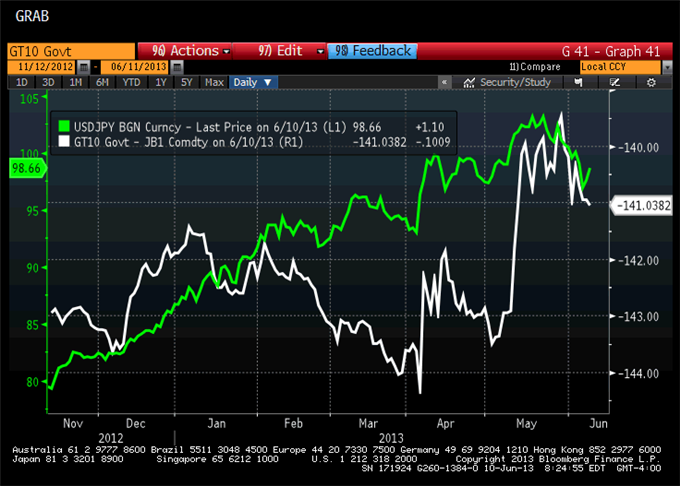 The short yen/long dollar trade was thought by many to be the can’t-miss trade of 2013, and while still heavily profitable, recent yen strength has raised concerns that the window of opportunity has closed.

Five months is a relatively short period of time for a move of this magnitude, but it was supported by monetary policy and economic fundamentals, including the performance of bonds and equities.

However, the short yen trade started to look very slippery in late May and early June when the yen started to rise rapidly. The closely watched USDJPY pair peaked at 103.74, then dropped below 100 and hit a low of 95 last week.

This aggressive reversal, which happened within a span of just two-and-a-half weeks, led many traders to wonder if the “best trade of 2013” is now over.

To answer this question, we need to first recognize that investors who sold yen at the beginning of the year are still deep in profit. Between January and May, USDJPY rose as much as 21.7%, and it is currently only 4.2% from its high, which means it is still up more than 17%.

From the perspective of trade management, while many of these investors are not happy to see the recent rise in the yen, and some could have even been shaken out on the move below 100, a 4% drawdown won't be enough for most investors to hit the panic button. In fact, the nearly 350-pip rally from 95 to 98.50 seen in USDJPY on Friday and today reflects bargain hunting and the reloading of short yen positions by some investors.

Rethinking the Impact of “Abenomics”

The real question should be whether the fundamentals driving the dollar rally or the yen selloff that began in November have changed, making this a real top in USDJPY.

There is no question that we have seen a significant amount of deleveraging in the equity and bond markets. Some of the assumptions about the implications of “Abenomics” have not transpired, the most important of which is un-hedged Japanese foreign investment.

The rise in the Nikkei in the beginning of the year made Japanese investors net sellers of foreign bonds. The message from the Japanese has also been mixed, with the Bank of Japan (BoJ) setting up the market for a long period of aggressive bond purchases (hence, long USDJPY trades) but then warning about the risks of inflation.

To everyone's disappointment, Prime Minister Shinzo Abe also failed to introduce new prescriptions to fix the Japanese economy when he unveiled his latest policy agenda, and lately, investors have been rethinking the impact of “Abenomics.”

At the same time, the slide in US stocks and uncertainty about Fed tapering caused widespread deleveraging that led investors to cut their long dollar positions.

The following chart of USDJPY (green line) and the spread between US and Japanese ten-year bond yields (white line) actually says it all:

USDJPY has been falling because the spread between US and Japanese bond yields has dropped sharply. Ten-year Japanese government bond (JGB) yields have been unusually volatile, discouraging Japanese investors from buying foreign bonds and leading to a sharp selloff in USDJPY.

At the same time, Japanese economic data continues to improve, while we have begun to see some unevenness in US data.

The next few percentage-point moves in USDJPY will be determined by the direction of US and Japanese monetary policy, both of which have caused uncertainty in recent weeks.

Investors are still trying to figure out how serious the Federal Reserve is about tapering asset purchases this year, and this Thursday’s US retail sales report will help shape those expectations. However, unless there is a big surprise in retail sales, the outcome of tomorrow's Bank of Japan policy decision should have the larger impact on USDJPY.

The best-case scenario for USDJPY is if the BoJ extends the maximum duration of its funds supply operation from one to two years and increases the frequency of bonds purchased. Given the sharp decline in the Nikkei and the volatility in the yen, we suspect that the central bank will be eager to stabilize the markets.

However, there have also been improvements in economic data, and BoJ Governor Haruhiko Kuroda previously criticized successive policy actions, which means he could do nothing more than an operational tweak of the maximum duration of their funds supply operation, which would be a disappointment for USDJPY.

The worst-case scenario for USDJPY would be if US retail sales missed expectations and the Bank of Japan failed to deliver.

As shown in the daily chart below, USDJPY is in the sell zone according to our double Bollinger Bands. There is near-term resistance at the 50-day simple moving average (SMA) and first standard deviation Bollinger Band at 99.25, but obviously, the key resistance level is 100. 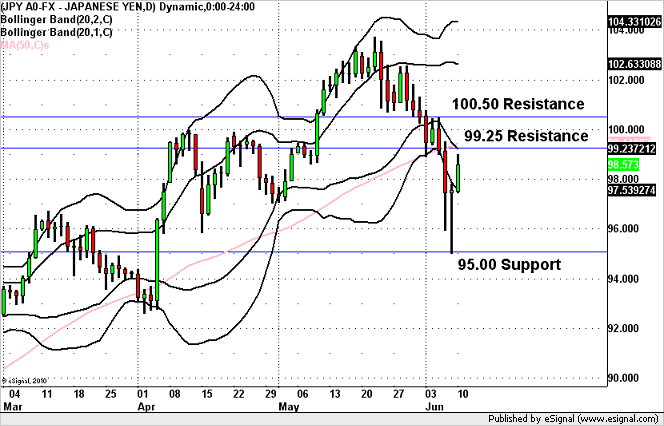 Right now, however, the momentum is still skewed to the downside until 99.25 is broken, which means traders should be mindful of support at last week's low of 95, which is also a psychologically significant technical level.