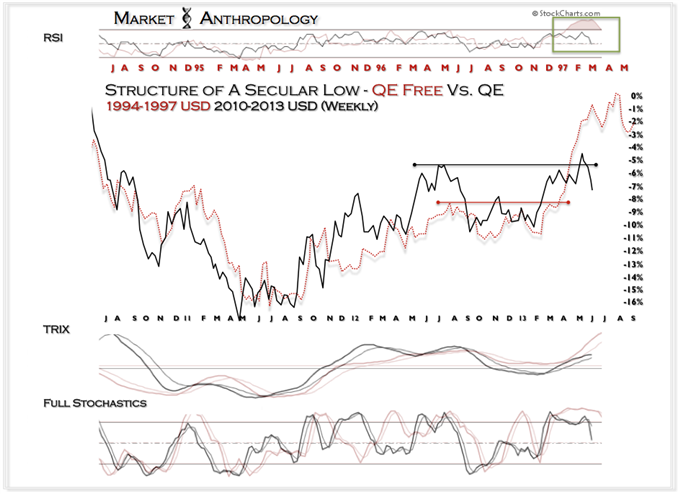 Based on reliable past momentum trends, a potential reversal in precious metals, and increasing euro strength, the US dollar index may now be set up for a sustained downside move that would catch many traders off guard.

In January 2013 and even into December 2012, we expressed our opinion that the US dollar index (USDX) was becoming discreetly built with upside momentum despite the euro's considerable strength. This was most evident in the large positive divergence in momentum relative to price.

Coupled with our work in the precious metals sector, which pointed towards significant weakness through the first half of the year, our comparative profile of the dollar's previous breakout, and the saturation of euro bulls through January, we felt strongly that the USDX was becoming primed for a reversal.

Fast forward to today, and our concerns with the possible exhaustion in the US dollar index appear to be well founded. While we have incorporated the previous secular pivot of the USDX in our weekly notes, over the past several weeks, we highlighted the diverging momentum signatures of the pattern with audible caution towards exhaustion.

The bottom line: we feel that the dollar should have gained more cumulative momentum during the upside pivot and built-in expectations that led to its false breakout.

At this point, however, it's too early to speculate how significant the downside reversal in the USDX will be and its kinetic impacts on sectors such as precious metals and commodities in general.

Having said that, the USDX had a clear opportunity to extend itself away from the technical break, but failed quite dramatically. In our opinion, and now coupled with our work in the precious metals sector—which points towards an upside reversal in the metals—as well as positive momentum divergences in the euro, and the record net-long USD commitments, we like trading the flip side of the coin.

By Erik Swarts of MarketAnthropology.com