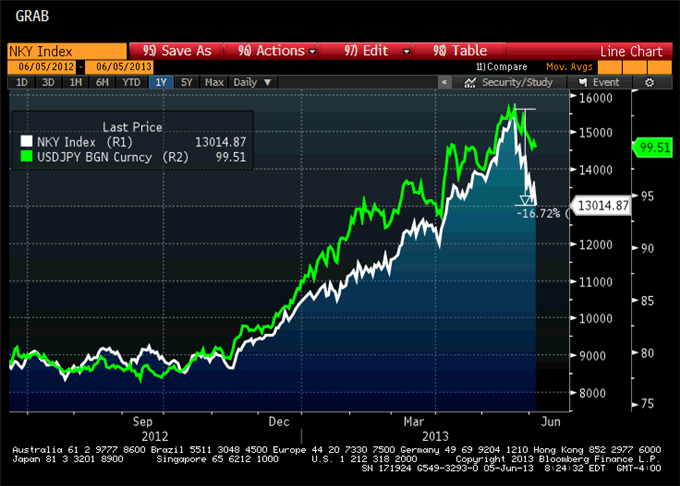 New Reasons to Worry About the Dollar

Underperforming economic data has again caused world currency and equity markets to be hit by a wave of deleveraging.

The performance of the US dollar (USD) has been very erratic and dependent upon which country's outlook is uglier. While the greenback has fallen sharply against the Japanese yen (JPY), it is holding steady against the euro (EUR), is down only slightly against the British pound (GBP), and is up sharply against the Australian dollar (AUD), which was hit earlier today by disappointing economic data.

Broad-based weakness in global data raises fresh concerns about growth and the strength of the recovery, but today, the strongest focus is on the US labor market and the potential outcome for Friday's non-farm payrolls (NFP) report.

The ISM non-manufacturing index rose to 53.7 from 53.1 in May, reflecting a small increase in service-sector activity. However, any optimism was quickly erased when investors took a look at the employment component of the report, which declined from 52 to 50.1 last month.

As one of the market's favorite leading indicators for non-farm payrolls, the decline in this sub-component of ISM could reset expectations for Friday's NFP release. Up until now, economists were looking for payrolls to rise by 167K (from 165K the previous month), but looking at today's ISM numbers, we feel that traders will adjust their positions to discount the possibility of a downside surprise.

According to ADP, US companies added only 135K jobs to their payrolls in the month of May. While this was more than the previous month, the increase fell short of expectations. The details of the report showed the service sector adding 138K jobs and the manufacturing sector shedding 3K jobs. The losses seen in the manufacturing sector represent the second consecutive monthly decline in that area.

With both the manufacturing and service sectors experiencing weaker job growth in May, the recovery in the labor market could be losing momentum. We will know for sure on Friday, but right now, the price action in USDJPY shows that traders are decreasing expectations for tapering asset purchases.

The Fed’s Beige Book report will be released later this afternoon, and this survey of economic conditions in the 12 Fed districts will also help to shape expectations for payrolls and the outlook for monetary policy.

Meanwhile, the persistent decline in Japanese stocks is weighing heavily on USDJPY. The Nikkei dropped another 3.8% overnight, taking its total two-week losses to over 16.5%. Investors were disappointed by Prime Minister Shinzo Abe's structural reform agenda and its lack of new measures to overhaul corporate taxes, immigration, and deregulation.

As shown in the chart below, there is a very strong correlation between the USDJPY and the Nikkei. The recent decline is one of the primary reasons why USDJPY has been selling off so aggressively.

The Bank of Japan (BoJ) won't be happy with the volatility in Japanese stocks either, and the Bank could attempt to stabilize the market by increasing the frequency of Japanese government bonds (JGBs) purchased next week.

We can't imagine that the central bank would just sit idly by and watch Japanese stocks fall as quickly as they have without taking some type of action—verbally and/or physically. Either form of action by the BoJ would likely help stem the recent slide in USDJPY.