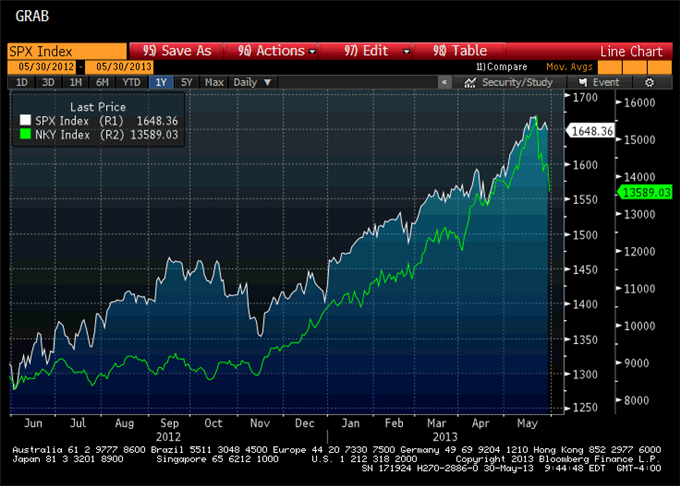 Asian volatility and disappointing US data has caused nervous investors to bail out of the long dollar/long stock trade in droves as uncertainty takes hold of global equity and currency markets.

The mighty dollar is losing its luster as it declines for the second day in a row. This time the weakness is not being caused only by profit taking, although that has contributed to the selloff. The real driver of the pullback is disappointing US economic data.

Following this morning's economic reports, the EURUSD broke above 1.30 and USDJPY tested 101. US stock index futures gave up earlier gains and traded lower at the open.

While we don't feel that the data was terrible enough to warrant this reaction in currencies and equities, the long dollar/long stock trade is getting crowded, and any bad news was enough reason for investors to bail.

US first-quarter GDP growth was revised down to 2.4% from 2.5% as lower government spending and weaker inventory rebuilding offset stronger personal consumption. US jobless claims also rose to 354K from 344K, and continuing claims reached 2.986 million, up from 2.923 million.

While they missed expectations, these economic reports don't take the US off the road to recovery. While the economy grew less than expected in the first quarter, consumer consumption saw its biggest gain since the fourth quarter of 2010.

Healthy US demand should eventually lead to faster inventory replenishment and stronger underlying growth. Jobless claims increased, but the absolute amount of claims filed is still relatively low and consistent with a continued labor market recovery.

We feel that in due time, investors will realize that the Federal Reserve plans for tapering asset purchases won't change because of today's economic reports. For right now, however, there is a lot of uncertainty in world equity and currency markets.

The Nikkei plunged 5% overnight, and while the volatility is being contained in Asia for the time being, it is making US investors nervous as well. Between the volatility in Asian markets and the threat of decreased stimulus from the Fed, it may be difficult for the S&P 500 to make new highs.

The following chart shows the correlation between the SPX and NKY. If Japanese stocks continue to fall, it could indirectly trigger a top in US markets as uncertainty spreads around the world.

For USDJPY, a top in stocks accompanied by continued selling of foreign bonds leaves 103.74 as the near-term top, and further gains would now require additional easing action by the Bank of Japan (BoJ).

See also: A Critical USD/JPY Test in the Making