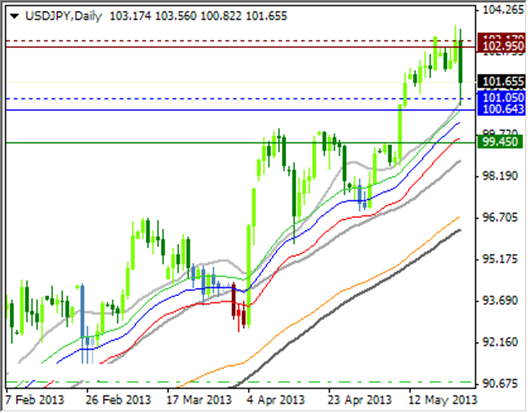 When viewed in longer-term time frames, the sharp selloff seen in equities and major yen crosses is likely a correction within the overall uptrend, thus allowing swing traders some attractive possibilities.

Whether you’re looking at Dow bulls or USDJPY bulls, the question seems to be the same: Is this where sentiment turns? And the best answer to that question may be: It depends on the time frame.

See related: The Answer to That Burning USD/JPY Question

Let’s admit here and now that Fed Chairman Bernanke’s statement said everything relevant, and that the Q&A of the testimony probably got away from him. As such, the idea that the negative swing of Wednesday’s Dow session was the driver for a “needed” Nikkei correction is flawed, as that had a lot to do with the yen strength. Risk came off the table, and when viewing that within the context of the Dow, USDJPY, and Nikkei uptrend, it’s a far cry from a reversal.

I’m not saying the market will go up indefinitely, but since when does a dramatic reversal –and frankly, one that comes on the heels of no major shift in Fed or Bank of Japan (BOJ) policies—qualify as a reversal and not simply a correction within the overall trend?

Have bulls become so vain that one look at a slightly unflattering mirror sends them running? Well, the near-term bulls, yes. It’s the longer-term buyers that will step in and “save the day,” so that means that this does present an opportunity for swing traders who see these corrections for what they are.

The scenario I am more willing to entertain as a possibility is a transition of the trend, and even that would mean that this presents an opportunity for traders looking to fade the move.

Let’s take a moment to look at how I identify a “trend.” That is primarily done visually with the 34-period exponential moving average (EMA) wave as well as the consistent green GRaB candles. The swing buy zone is created by the 20-period simple moving average (SMA) close and the 34-period EMA high in the context of an uptrend. This is where I park my limit order to buy.

Additionally, the 101.00 major psychological level for USDJPY is in play in this zone, which fortifies the support area. The justification for buying into weakness is dependent upon the uptrend; hence, this is also a correction.

Applying this same approach to EURJPY yields the same conclusion. The angle of the 34-period EMA wave is up, as defined by the “twelve-to-two-o’clock” angle, and once again, the green GRaB candles dominate the daily EURJPY chart, thus reflecting the bullish sentiment and momentum.

Looking at the swing buy zone between the 20-period SMA close and the 34-period EMA high, it’s clear to see that this area was tested, but did nudge the bulls back awake. 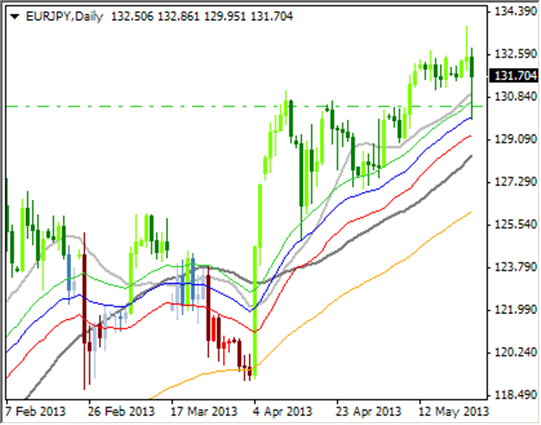 While the Dow is (at the time of writing) still in the red, it has bounced back from a 125-point selloff, and it seems that only the selling pressure at 15,300 is keeping the Dow from going positive.