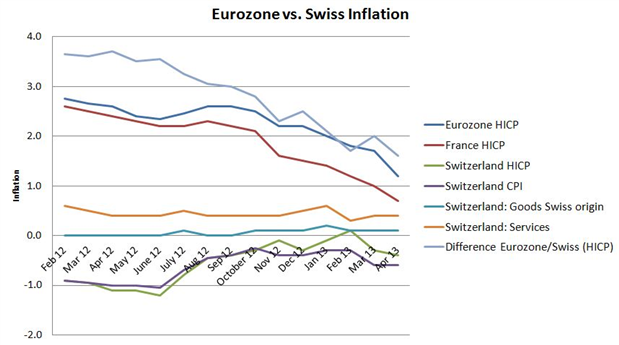 A EUR/CHF Move That May Never Happen Again

Changing economic conditions in Europe and globally are likely to cause the EUR/CHF to top close to 1.30, at which point the Swiss franc may be reborn as a risk currency and grow continually stronger, never to see 1.30 again.

The Swiss franc(CHF) continues to weaken, but we think that the EURCHF might put in a top close to 1.30 in the coming months. After that, the franc should slowly improve again because it will become a sort of“risk-on” currency.

As a basis, you should understand that the Swiss franc has four main drivers:

Points 2 and 3 speak towards CHF as a risk-on currency, and point 1 for a safe haven, although we have learned that gold is not always a truly “safe” haven. (Learn more about the drivers of CHF movement on SNBCHF.com.)

Reasons Why EUR/CHF Could Touch 1.30

Reasons Why the 1.30 Is the Likely Top for EUR/CHF

Inflation differences between the Eurozone and Switzerland will narrow. Due to falling or stagnating wages in the Southern Eurozone, the gap has narrowed from 4% to 1.7% in one year, and the HICP difference to France or Italy is 1.4%. This movement will continue.

Once EURCHF touches the area of 1.28 to 1.30, the Swiss CPI will incorporate most FX changes two months later through a 27% import share. Then, Swiss inflation could be higher than the SwissNational Bank (SNB) inflation path, so the Bank might need to exit the floor and potentially hike rates well ahead of the Federal Reserve and European Central Bank (ECB). When exactly depends on the speed of the global recovery.

Current US growth is mostly based on Fed-induced spending and investments that left the Eurozone (Germany included) driven by fear and low expected returns(see the Gross Private Investment figures below).

New US jobs followed spending and investments. This capital movement from East to West might reverse soon. Chinese foreign direct investments (FDIs) are already positive after one year of outflows.

At the latest,the dollar (and probably stocks) should weaken again when the 2014 “Sell in May” tendency sets in again, and the Swiss franc will grow stronger at that point.

We currently see a continued weakening of US industrial production due to the strong dollar, which is also visible in the weak ISM Manufacturing data above.

Historical examples (e.g. Latin America) show that Washington consensus compromises will trigger a strong first-/second-year performance because austerity only helps at first. Spreads initially come down and rating agencies upgrade the concerned countries. This is exactly what happened to Greece. However, due to emigration, low spending, and underwater-mortgages, Greek, Spanish, and Portuguese growth will be hampered for many more years.

SNB sight deposits are still stable. This is a hint that the Bank is not able to sell many FX reserves. The SNB balance sheet seems to be well-alimented by profit repatriations and new cash savings.

The rising EURCHF exchange rate is only visible in the derivative instruments component of the balance of payments. These derivatives and FX traders' bets are notobvious on the SNB balance sheet.

The very important Swiss private investors seem to prefer to keep cash or buy Swiss stocks and houses; they do not buy European investments. The Swiss stock market is near all-time highs, and according to UBS, Swiss real estate is in a risk zone.

At the latest, from May 2014 on, the EURCHF should not rise over 1.30 again, because inflation rates might be similar in the Eurozone and in Switzerland, just that Swiss GDP growth, and, in particular, Swiss construction activity, will be higher over many years.

It is crucial that EURCHF hits 1.30 as soon as possible. With time, the inflation difference will further shrink.

SNB Acts Like a Hedge Fund, Not a Central Bank

The SNB might sell some reserves until the end of 2013. In a couple of years, however, the Bank might be forced to sell euros around 1.20 or even lower due to inflation pressures. In the meantime, the Bank must earn income to prevent future losses. Therefore, it acts like a hedge fund and invests cyclically, not like a central bank that tends to act rather counter-cyclically. An example would be the strong equity purchases in 2012/2013 and the reduction of the bond share in 2012.

Buy EURCHF at current levels near 1.24 and as a hedge (yen-denominated) against Japanese equities, something the SNB liked as an investment in Q1.

(See also the Elliott Wave explanation for buying EUR/CHFon SNBCHF.com. This fits our fundamental arguments, and the 1.30 level would be a somewhat stronger retracement in wave C.)

Pay attention to Fed statements that range from reducing QE3 to even lower and exceptionally low rates for 5-10 years. The Fed should see that stronger growth happens where the "hot money" is flowing. Until recently, the target has been the United States. If, however, the US does not exhibit better growth figures, then these funds will move away to Germany or the emerging markets that have more sustainable growth thanks to current account surpluses and/or lower wages.

P.S. I failed to mention the case that weaker European countries or even France might leave the Eurozone in 5-10 years to obtain their "printing presses" back. Thanks to the masses of German bonds on the SNB balance sheet, EUR/CHF will surely move over 1.30 again if that happened.

By George Dorgan of SNBCHF.com