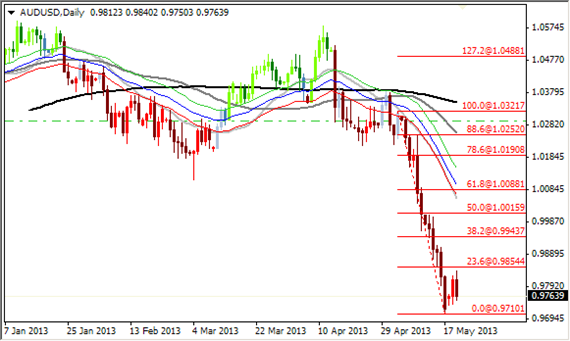 With established trends and clearly defined support/resistance levels, the AUDUSD and NZDUSD could be favorable trade targets ahead of Bernanke’s testimony and the FOMC meeting minutes.

The US dollar index has now reached a level that could feel like a natural jumping-off point for dollar bulls unwilling to take a ride lower through 84.00/83.50, both in terms of price, and considering tomorrow’s testimony from Fed Chairman Ben Bernanke and the Federal Open Market Committee (FOMC) meeting minutes.

The strength of Friday’s rally to 84.51 seems to have faded, and while support remains, the willingness to press to higher highs will likely only come if the bulls hear what they want in terms of the “tapering debate” and feel comfortable jumping back into long positions.

Technically, this point in the dollar’s market trend is both volatile and vulnerable since there is plenty of bullish sentiment and momentum, but it has not yet organized into an uptrend. While the first step has been taken—the 34-period exponential moving average (EMA) wave is moving higher at a “twelve-to-two -o’clock” angle—the June/July 2012 highs pose a formidable obstacle to upside follow-through.

In actuality, dollar bulls should welcome a pullback because it would establish a floor that the uptrend could then build upon. It would shore up the argument that the dollar is overbaked at these levels and show that even after a move lower, the buyers are willing to step in. I too welcome such a pullback since there are opportunities across multiple dollar-correlated pairs.

Two pairs specifically on my radar are the AUDUSD and NZDUSD. Both these commodity dollar pairs have directional bias (a trend on their respective daily charts), which comes in contrast to the EURUSD and USDCAD, which are both chopping in larger sideways ranges. The USDCHF has an uptrend, and therefore, it would also be a preferred pair to trade alongside others like AUDUSD and NZDUSD.

The daily chart of AUDUSD has been trending sharply lower, and with this pair firing on both cylinders (dollar strength and Aussie weakness), a pullback in the US dollar could allow the Australian dollar to correct higher, which, because of the overall weakness of the pair, would most likely trigger bears into selling strength.

The initial decline would take AUDUSD to the 23.6% Fibonacci retracement level, and if the greenback weakness is even more pronounced, look to the 38.2% target and the 99.50 major psychological level. 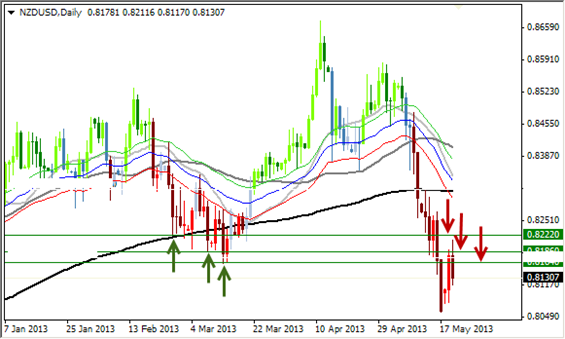 The daily chart of NZDUSD has traded higher into previous support levels, and ultimately, the move higher into this area could form a “common level” (in this case, resistance where there was once support) and result in exhaustion.

The downtrend in NZDUSD is not nearly as established as that seen in AUDUSD, but traders are likely to sell into strength, and US dollar weakness could be the likely catalyst for the correction higher.

Possible Catalysts for US Dollar Weakness

The most obvious theme for traders is nervousness. Since the US dollar has been so strong, there is a feeling that both sides of the Fed—doves and hawks—are ready to end or slowly reduce the $85-billion-per-month asset-purchase program. The reduction, or “tapering,” of quantitative easing (QE) is what investors and traders want…not the sudden-stop scenario that has been sporadically discussed.

There is some feeling that the dollar is long and top-heavy. With the weaker shorts squeezed out, it’s the weaker longs that may present the biggest threat to the move higher, and this could also be the catalyst for a sharp selloff if Bernanke disappoints on Wednesday.

In conclusion, the dollar is still wavering in regards to the “how” and “when” of QE, and the better the data becomes, the sooner we will gain clarity regarding the “when” portion of the equation.