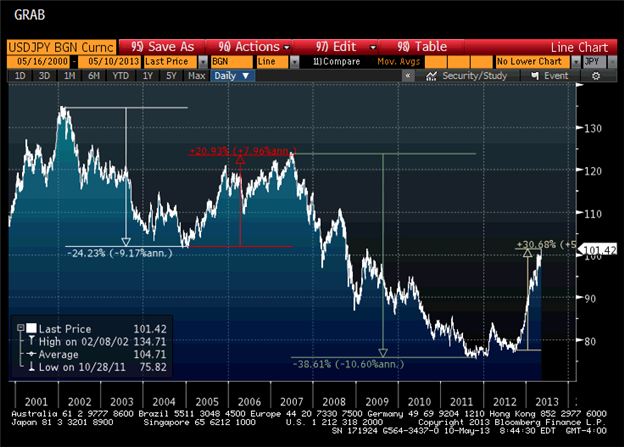 Why the Dollar Rally Can Keep Rolling

Fundamentals favor sustained and broad-based dollar strength, and if next week’s US retail sales data shows encouraging signs, look for continued gains against the euro, yen, aussie, and others.

After weeks of consolidation, we are finally getting some action in the forex market. The rally in the US dollar extended higher this morning, forcing the EURUSD below 1.30, USDJPY to a fresh four-year high of 101.73, and AUDUSD below parity during intraday trade.

While the move in USDJPY is stealing the headlines, there's no question that this is a broad-based dollar rally because every major currency has lost value against the greenback. What started as a post-jobless-claims uptrend has now turned into the biggest two-day dollar move in over a month, and if next week's US retail sales report confirms that job growth has translated into spending, the rally will continue.

Investors are finally beginning to realize that the Federal Reserve is the only major central bank considering paring stimulus in a sea of policymakers who have just taken new steps to increase support for their economies. Top that off with better-than-expected US data and it is no surprise that the dollar has soared. The only surprise was the timing.

Being long USDJPY in the second quarter has been a true test of patience, but it has also been one of our favorite trades because of the fundamental divergence in monetary policy direction. In early April, the Bank of Japan (BoJ) unleashed the world's most intense burst of stimulus, pledging to pump $1.4 trillion over the next two years in order to boost inflation to 2%. The initial announcement drove USDJPY to 99.95, but the currency pair failed to break 100 and treaded water for the next few weeks, even as the Fed's optimism about the US economy kept discussions about tapering US asset purchases alive.

3 Criteria for Sustainable Gains in USD/JPY

Earlier this month and even before, we wrote that there were three criteria needed for USDJPY to break 100 and sustain an eventual move towards 105. All of these conditions have now been met:

1) Rise in US yields

2) New highs in the Nikkei

According to the Ministry of Finance's weekly portfolio data released last night, Japanese investors have finally become net buyers of foreign bonds after selling them for six weeks straight. As a result, and as long as this trend continues—and we believe it will—USDJPY will extend even higher.

If the BoJ is successful in achieving its 2% inflation target, it would be consistent with a USDJPY level of 104/104.50.

Essentially, the Bank of Japan has eliminated any reason to buy yen over the next two years, and local investors are finally beginning to realize it. The Bank's commitment to bold easing means policymakers will do everything in their power to drive down yields, leading to a more aggressive shift out of Japanese bonds by domestic investors, who will now look abroad for higher yields.

Moreover, they will do it on an unhedged basis, as the BoJ's policies should keep the yen weak, thus eliminating concerns about a currency offset. Simply put, the central bank has given Japanese investors a reason to go global, and they have finally taken the bait.

As you can see on the chart below, trends in USDJPY can last for a very long time and can extend further than most investors would imagine. Between 2007 and 2011, the currency pair dropped nearly 40%, and while there were certainly recoveries along the way, they were brief and shallow.

Over the past seven months, USDJPY had already appreciated nearly 30%, leading many investors to wonder how much higher it could rise, but considering that the Bank of Japan has just begun easing, we think there's a lot more room to the upside.

The pair's ten-year average is 100, and given the magnitude of the BoJ's actions, at a minimum, we expect USDJPY to hit 103 with a very likely extension to 105 to follow. The moves in USDJPY frequently overshoot fundamentals, and for this reason, we think a first target of 103 and a second target of 105 is reasonable. The 110 level, however, may be a stretch. 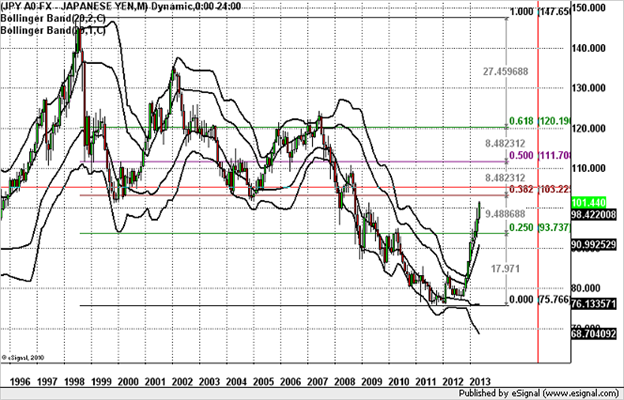 On a technical basis, 103 is significant because it is the 38.2% Fibonacci retracement of the 1999-2011 selloff in USDJPY, and 105 is psychologically significant, so many stops and take-profit orders are likely to be sitting at that level.