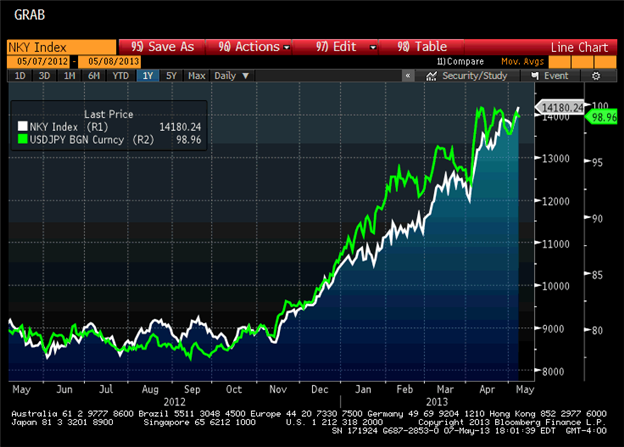 The Hottest Trades on the Market Right Now

Given the cloudy outlook for currencies and the renewed onset of currency wars, traders seem much more compelled by the strong trends in the equity markets, and for now, that’s where the big movers are.

It was a very quiet overnight session in FX today with little event risk on the docket, but most high-beta currencies improved as the night wore on, boosted largely by better-than-expected trade data out of China, as well as a small rally in equities.

Over the past week, all of the action has been in equities. US stocks powered to new record highs, while currencies quietly consolidated. The US dollar (USD) weakened against the euro (EUR) and Japanese yen (JPY) and strengthened against the British pound (GBP), Swiss franc (CHF), and Australian (AUD) and New Zealand (NZD) dollars.

This divergent price action confirms that there isn't one directional interest in currencies. Part of the reason why currencies have not enjoyed the same type of strong trend as equities is because this is a QE-driven rally, and with central banks around the world engaged in new rounds of quantitative easing, the availability of more stimulus has been ambiguously positive for stocks.

Unfortunately, these simultaneous easing programs have also clouded the outlook for currencies, leaving investors to wonder which central bank will win the race to debase.

The rally in stocks and consolidation in currencies also tells us that investors are much more interested in joining the trend in equities as opposed to trying to figure out whether support or resistance will be broken in currencies. Eventually, this will change, but for the time being, we can't ignore the fact that the big moves are happening in other markets.

However, stocks have helped to keep currencies supported, and if not for the equity rally, we would probably have seen deeper selloffs in both the EURUSD and AUDUSD.

The lack of US economic data this week has also contributed to the consolidative price action. The only notable report on Tuesday was the IBD/TIPP economic optimism index, which surprisingly declined, showing a drop in sentiment.

According to the report, Americans grew less optimistic about the economic outlook and federal policies, but thankfully, they grew more optimistic about personal finances. The reason why this pullback is so surprising is because stocks have been performing well, and now we will have to wait until Thursday for any new market-moving US data. (See the economic calendar here.)

The EURUSD tested the prior day’s highs in morning European trade today, rising steadily throughout the session on reported reserve diversification demand from Asian central banks. The pair has been trapped in a very narrow range for the past few days and has cycled between 1.3050 and 1.3125.

As we noted earlier, it is being pulled in opposite directions while shorts bet on the prospects of a possible negative deposit rate and longs speculate that the economic contraction in the region has reached a bottom.

Elsewhere, the only real volatility in today's early trade came out of New Zealand, where Reserve Bank of New Zealand (RBNZ) Governor Graeme Wheeler confirmed that the central bank intervened in the exchange rate to "take the top off the rallies."

The NZDUSD pair tumbled more than a cent on the news, dropping to a low of .8360 before recovering back towards the .8400 level. Mr. Wheeler's comments echo yesterday's Reserve Bank of Australia (RBA) concerns about the valuation of the aussie and suggest that both central banks in the region will keep a close eye on exchange rates going forward.

Meanwhile, AUDUSD again tested the lows near the 1.0155 level during the Asian session but managed to bounce after better-than-expected Chinese trade data, which printed at 18.2B versus 15.5B expected. There was, however, some skepticism about the reliability of the report, as some analysts claimed that Chinese companies may have exaggerated the numbers to avoid capital controls.

The Australian dollar tanked yesterday after the RBA cut interest rates by 25 basis points (bps) to a record low of 2.75 percent.

GBP/USD May Soon Put in a Significant Top

The British pound (GBP) traded lower against both the US dollar and euro on Tuesday. Having tested and consolidated below 1.56 for the past four trading days, the reversal in the GBPUSD points to a potential top.

Moreover, with no new UK data on the economic calendar until Thursday, we will have to wait and see if this becomes a more significant turnaround for the currency pair. Given the recent improvements in UK data, investors will be looking for more upside surprises. If the data delivers, the GBPUSD could aim for another test of 1.56, but if industrial or manufacturing production declines, this pullback in sterling could become a more significant top for the pair.

Nikkei Rallies Hard, but USD/JPY Does Not

For the first time in almost five years, the Nikkei topped 14,000 on Tuesday. This utterly impressive 3.5% rally in Japanese stocks should have been positive for USDJPY, but instead of rallying, all of the Japanese yen crosses declined.

As shown on the chart below, over the past few years, USDJPY and the Nikkei have had a very strong relationship because both are considered risk assets, but the recent price action suggests that the Nikkei rally is keeping investment flows at home and possibly even attracting foreign investments.

While the Bank of Japan (BoJ) easing measures have made the country's bonds extremely unattractive, it has also provided a big boost for Japanese stocks. Global fund managers looking to diversify could see the BoJ's commitment to providing continuous and aggressive support for the Japanese economy as a reason to increase their exposure to Japanese equities, especially now that we are starting to see an improvement in Japan's economy. This very trend could be one of the primary reasons why the yen refuses to fall.

As such, USDJPY continues to meander just beneath the 99.00 level, and the pair’s failure to break through and hold 99.50—especially after last week’s strong US non-farm payrolls (NFP) report—should be of concern to the bulls.

US data is very sparse this week, and perhaps the market will need to see further evidence of improvement before making another concerted run at the 100.00 level. For now, the key resistance level remains out of touch.

By Boris Schlossberg and Kathy Lien of BK Asset Management