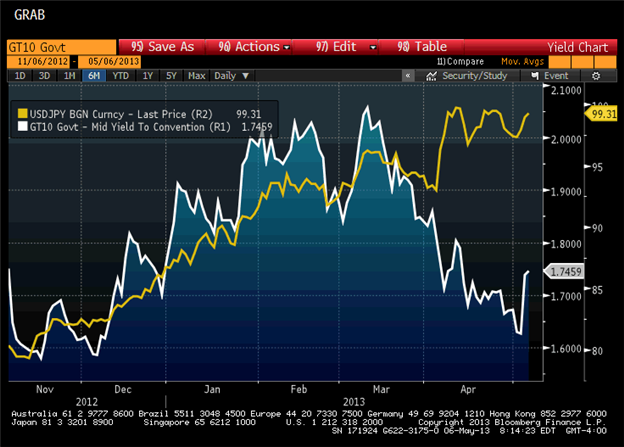 USD/JPY Has One More Reason to Rally

As USDJPY sets up for another test of the key 100-level resistance, the pair will need to overcome a host of obstacles, but there is one catalyst in particular that could power the long-awaited break this week.

The US dollar (USD) is moving higher against all major currencies in early-Monday trading, and the absence of new US economic data means some currencies are experiencing deep selloffs, while others are seeing shallow declines depending on how pertinent overseas economic reports surprised overnight.

The euro (EUR), for example, is down only marginally against the dollar because the Eurozone's PMI services index was revised higher in April. The Australian dollar (AUD), however, is down sharply after retail sales dropped 0.4% and HSBC reported slower Chinese service sector activity.

The movements in these currencies are interesting, but many traders have their eyes on USDJPY, which is again inching its way towards the key 100-level resistance. Since the Bank of Japan (BoJ) eased monetary policy at the beginning of April, investors and economists around the world have been looking for USDJPY to break 100.

Hopes began to fade while the pair struggled below 100 throughout the month that followed, but the enthusiasm has now returned, and investors are hoping that this key level will be broken sometime this week.

Are There Potential Catalysts for a Break?

We believe that a break of 100 for USDJPY is ultimately inevitable, and given the current proximity to this level, a test is possible, but we are skeptical of whether a sustained break can occur this week.

There's very little US data on the economic calendar, and 80% of S&P 500 companies have already reported earnings. The only potential catalysts from the US side would be speeches from Federal Reserve officials (Fed Chairman Ben Bernanke included), but most of them are not scheduled until Friday.

Therefore, if USDJPY were to break 100, it would have to be driven by Japanese data. The two main event risks for the Japanese yen (JPY) this week are the country's current account numbers (due on Thursday) and the Ministry of Finance's weekly flow of funds report.

In order for USDJPY to rally, we need to see Japanese investors finally diversify into foreign bonds. However, with Japanese markets closed for two days last week as well as Sunday night in observance of holidays, this week's report may not show that much-needed diversification.

Keep an Eye on US Treasury Yields

Last month, we said that in order for USDJPY to muster a sustained break of 100, three underlying changes needed to occur: 1) US bond yields needed to recover; 2) The Nikkei needed to extend to new highs; and 3) Japanese investors needed to stop selling and start buying foreign bonds.

While we have yet to see the Japanese increase foreign bond investment and the Nikkei was closed today, so it failed to participate in the record-breaking rally in US stocks, US bond yields are beginning to recover.

Thanks to better-than-expected US jobs data, US ten-year yields spiked higher on Friday. Between November and March, the rally in USDJPY was supported by rising Treasury yields, but in March, yields began to plunge as US economic disappointments caused investors to question the Federal Reserve's ability to reduce stimulus by varying asset purchases.

However, recent optimism from the Fed and Friday's solid non-farm payrolls (NFP) numbers could make the recovery in yields last, and this trend alone could help USDJPY break 100.