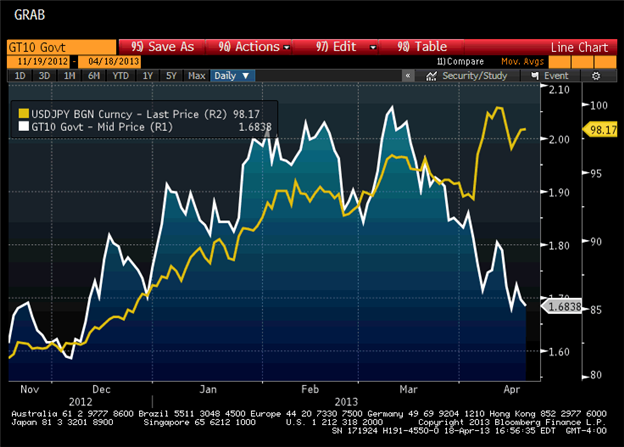 Three main factors have so far prevented USDJPY from overcoming the key 100 resistance level, and if a sustained break is to occur, these are the conditions that will need to change in the short term.

It was a schizophrenic night in the FX markets, as the early burst of risk optimism gave way to complete standstill as all eyes turned to the situation in Boston, where authorities were engaged in a firefight and deep manhunt for the Boston Marathon bombing suspects.

Earlier, in the Asian session, comments by Japanese finance minister Taro Aso helped fuel a rally in USDJPY, which powered through the 99.00 level by mid-morning European dealing. Aso reportedly noted that no one in the G-20 was opposing Japan's newly aggressive monetary policy, a comment that helped put the bid back in the pair and had it on track for a move towards the 100.00 level.

With no other major economic news on the docket and with precious metals prices recovering, risk appetite came back into the markets and all the high-beta currencies were lifted higher, primarily through the yen crosses. The Australian dollar (AUD) and GBPUSD performed best, with the aussie benefiting from an uptick in gold prices, while cable was rumored to have some M&A flows supporting it in early London trade.

However, as the manhunt deepened by mid-morning in the European session, FX trading came to a virtual halt, with traders watching the story out of Boston, which overshadowed any economic developments.

On the economic front, the G20 meeting, which is also being overshadowed by the events in Boston, will affirm a commitment to avoid weakening currencies to gain a trade advantage, according to a draft statement prepared for a meeting this week in Washington, Bloomberg BNA reported. However, several officials, including US Treasury Secretary Jack Lew, have gone out of their way to note that Japan's actions are aimed at the domestic market, rather than as competitive devaluation.

Such laissez-faire posture by the G20 has emboldened USDJPY bulls to press on with the rally, as the risk of G20 censure has clearly disappeared.

With no major events on the economic calendar in North America today, traders may continue the risk rally, although trading may be slow as markets remain riveted on Boston. If the remaining suspect is captured, we could see a possible relief rally for purely psychological reasons alone.

3 Factors Standing in the Way of USD/JPY

With USDJPY trading above 99 this morning, many forex traders are wondering whether it is finally time for the currency pair break 100. The past few weeks have been frustrating for anyone with short Japanese yen positions, as USDJPY has struggled to rally all along.

Since the Bank of Japan (BoJ) announced its aggressive new easing policies, USDJPY climbed to 99.95, a few pips shy of the key 100 resistance level in the currency. We, along with many experts, agree that it is only a matter time before USDJPY breaks 100, but questions remain about whether the second test of that key level will be the charm.

There's no question that there are a ton of stops around 100, and in order for the currency pair to firmly break above this level, these three factors, all of which have been holding back the rally in recent weeks, will need to change:

US Bond Yields Need to Recover

Since November, USDJPY enjoyed a nice, steady rally that was supported by Prime Minister Shinzo Abe's promise of aggressive monetary easing as well as rising US bond yields. During this time, stronger US economic data and talk of tapering asset purchases boosted the dollar and Treasury yields.

Now, the Japanese have delivered on easing, but US yields have plunged, and as a result, one side of the equation was breaking down, effectively capping the rally in USDJPY.

The turn in US yields began in March, but the selling accelerated after a series of US economic disappointments led investors to question the Federal Reserve's ability to reduce stimulus by varying asset purchases. Even Fed officials are divided on what to make of recent reports. Some policymakers feel that the data is worrisome while others think the pull back is temporary. Either way, in order for the USDJPY to recover, we need US yields to stop falling and start rising.

Further Gains in the Nikkei

There has also been a very strong correlation between USDJPY and the Nikkei over the past year, as the weakness in the yen boosts the outlook for Japanese corporations. Aside from the prospects of more liquidity and a weaker currency, the Nikkei also followed US stocks higher. However, over the last two weeks, the S&P 500 halted its record-breaking rally, and global equity markets responded with their own losses. 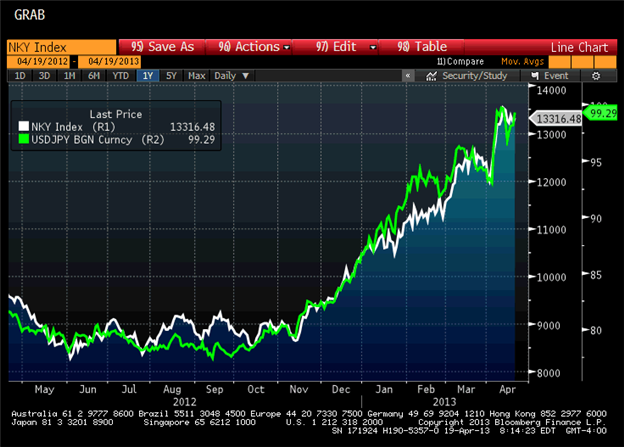 Given the strong correlation between USDJPY and the Nikkei, it was no surprise to see USDJPY also dropping lower alongside equities. If risk appetite continues to improve, however, it could be one factor that supports a USDJPY break above 100.

For a break of 100 in USDJPY to be sustained, the weekly flow of funds data needs to start reporting net purchases of foreign bonds by Japanese investors. And while the Japanese have been slow to react, it should only be a matter of time before they catch up, and when that occurs, the rally in USDJPY will find another catalyst.

By Boris Schlossberg and Kathy Lien of BK Asset Management