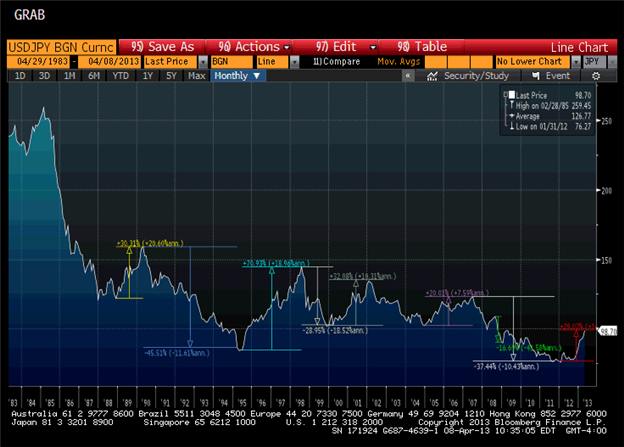 The Top 3 FX Trades of the Second Quarter (Part 3)

Thanks largely in part to the easy new monetary policies from the Bank of Japan, the USD/JPY has been on a tear of late, and as the second quarter unfolds, the pair is very likely to push even higher, making it perhaps the go-to trade idea for Q2.

Our three-part article series concludes today with a look at what is, in our opinion, the most attractive trading opportunity for the second quarter: going long the US dollar (USD) versus the Japanese yen (JPY) on the heels of aggressive new easing policies from the Bank of Japan (BoJ).

Trade #3: The Most Compelling Trade for Q2 Is Long USD/JPY

The USDJPY has been on a tear thanks to bold and aggressive easing from the Bank of Japan. The last time we saw a move this large was actually in November 2011 when the BoJ intervened in its currency.

When it comes to USDJPY, it is important to realize that trends in the pair can last for a very long time and extend further than most would imagine. Between 2007 and 2011, the currency pair dropped nearly 40%, and while there were certainly recoveries along the way, they were brief and shallow.

Over the past year, USDJPY has already appreciated nearly 28%, leading many investors to wonder how much higher it can run. Considering that the Bank of Japan has just begun easing, there's a lot more room to the upside.

Essentially, the Bank of Japan has officially eliminated any reason to buy yen over the next two years. The Bank’s commitment to bold easing means they will do everything in their power to drive down yields, leading to a more aggressive shift out of Japanese bonds by domestic investors, who will look abroad for higher yields. Moreover, they will do it on an unhedged basis, as the BoJ's policies should lead to further weakness in the Japanese Yen.

In other words, the central bank has effectively given Japanese investors a reason to go global. Their "quantitative and qualitative" easing is the central bank's boldest monetary policy program in recent history, and as we saw recently in the reaction to the US non-farm payrolls (NFP) report, it supersedes the ebbs and flows of the US economy.

In the long run, the Nikkei should also benefit from Japan's policies, and as shown in the chart below, USDJPY has a very strong positive correlation with the index, so a further rise in Japanese stocks should help fuel the rally in USDJPY.