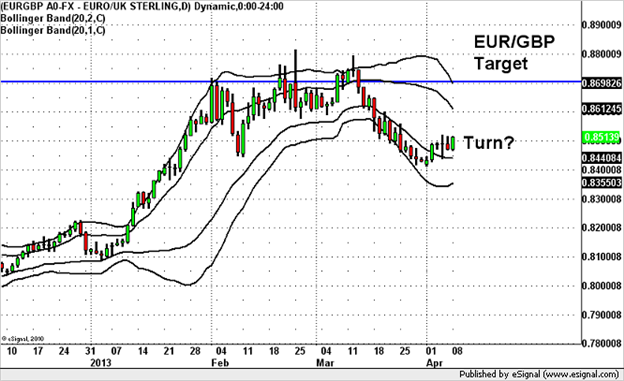 The Top 3 Forex Trades of the Second Quarter (Part 2)

With Mark Carney set to succeed Mervyn King as Bank of England (BoE) Governor this quarter, expectations about potentially aggressive easing have brought back the British pound short trade.

Ourthree-part article series continues today with a look at potential trade ideas involving the British pound (GBP), which is likely to lose ground against the euro and US dollar given the planned June departure of current Bank of England Governor Mervyn King.

At the beginning of the first quarter, we said one of our favorite FX trades was to sell the British pound (GBP) against the euro (EUR). While EURGBP ran from a low of 81 cents to a high of 88 cents during Q1, it has since fallen far off its lows and is currently trading at 85 cents.

We now believe it is time to reload GBP shorts against the EUR and US dollar (USD). While our preference is to buy EURGBP, the GBPUSD also reached a key resistance level at 1.54 and could struggle here.

For most of the first quarter, sterling had been in a very strong downtrend, but the currency bottomed in the beginning of March after the Bank of England (BoE) minutes revealed renewed concerns about inflation.

Prior to that, investors had widely believed that the BoE would ease again, but the focus on price pressures and the impact of a falling currency shut the door on that possibility. We still believe, however, that this reluctance to ease is only temporary. BoE Governor Mervyn King is stepping down at the end of June, and barring any major financial crisis, the chance of significant monetary policy changes are slim.

The game will change completely when Mark Carney takes office with a mandate to transform monetary policy. While Carney won't join the BoE until June, expectations about his level of aggressiveness can start to affect sterling as early as May.

UK economic data has been mixed, and improvements seen at the beginning of March are since starting to fade. The central bank's focus on inflation is very "data dependent" and could change if fiscal consolidation or slower global growth starts to weigh on the economy again.

Aside from the BoE's concerns about inflation, sterling also rallied at the end of the first quarter because the problems in Cyprus drove European investors back towards the relative safety of the GBP. If contagion from Cyprus is limited and the euro starts to recover from here, then the quasi-safe-haven status of GBP will become less attractive to regional investors.

The below chart of EURGBP shows the currency pair stabilizing at 85 cents. We are looking for a move back up to 87 and possibly even 88 cents.