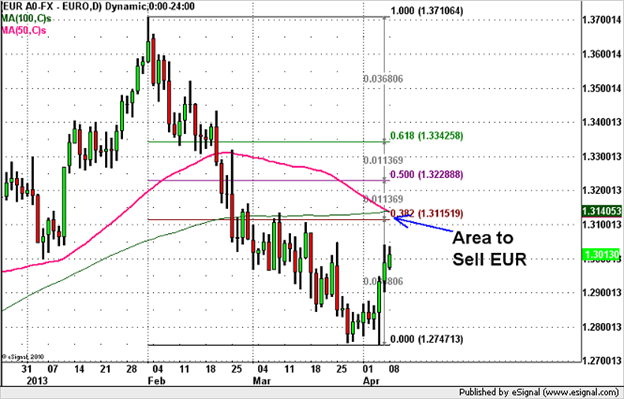 The Top 3 FX Trades of the Second Quarter (Part 1)

The Top 3 Forex Trades of the Second Quarter (Part 1)

Economic changes and shifting monetary policies have given rise to a spike in FX volatility, and in this three-part series, we’ll examine some of the most compelling trade opportunities of Q2, starting with US-dollar-based pairs.

The second quarter of 2013 has sure started with a bang! Key fundamental shifts in monetary policy and underlying changes in several prominent economies have caused a significant spike in volatility across the foreign exchange market.

The selloff in the Japanese yen (JPY) caused by aggressive new easing policies from the Bank of Japan (BoJ) drove all JPY counterparts higher, and since last Thursday, every major currency, including the US dollar (USD), euro (EUR), and British pound (GBP)have appreciated between 5.5% and 7.5% against the yen.

While shorting the yen is one of the most attractive trading opportunities for the second quarter—and our personal favorite, for that matter—it is not the only captivating trade idea for the months to come. In fact, in this three-part article series, we’ll examine a number of other trades to consider, starting today with the most appealing ways to trade the US dollar against major currency counterparts as well as some of the more thinly-traded or exotic currencies.

The first quarter of 2013 was marked by consistent improvements in the US economy that drove the dollar, US yields, and equities higher. However, Friday's abysmal non-farm payroll (NFP) report sent shockwaves across the financial markets, and we believe that this will be the first of many disappointments to befall the US economy in the second quarter.

This week's Fed minutes are likely to be optimistic, but it will be important to remember that policymakers did not have the latest NFP report on hand before the March meeting. Therefore, traders should take any talk about tapering asset purchases with a grain of salt because the views of many Fed officials probably changed as a result.

Normally, we would say that selling USDJPY would be the best way to position for lower US yields, but the impact of Bank of Japan easing supersedes mixed US economic data. USDJPY took out new highs even as ten-year Treasury yields plunged from a high of 2.05% to current levels near 1.7%.

Sell the Dollar Against Commodity Currencies

We don't expect risk-on/risk-off trading to be a major driver of the dollar in the second quarter. Instead, the trade will require tactical positioning in the US dollar because it will be all about relative performance.

We expect slower US growth to drive the dollar lower against higher carry currencies such as the Australian dollar (AUD) and New Zealand (NZD) dollar.

USDCAD could also fall as more recent indicators point to a stronger recovery in Canada for the second quarter. While Canada reported net job losses, manufacturing activity grew at its fastest pace in seven months, which should filter down to the economy.

With this in mind, selling the US dollar against the AUD, NZD, and CAD at current levels is not a good idea because these pairs have already run up. The more viable strategy would instead be to wait for a 1% retracement before selling.

Buy the Dollar Against the Euro, Korean Won

There are also currencies that we want to buy the dollar against, namely the British pound, the yen, the euro, and the Korean won (KRW). Our views on the dollar against the GBP and JPY will be explained in greater detail later in this article series, so we'll focus in on the EUR and KRW today.

Once again, we do not believe that the EURUSD should be sold at current levels because we expect the rally to extend in the near term. However, if the EURUSD rises to the 1.3135 to 1.32 range (as shown on the chart below), it would be an ideal time to sell the euro.

The primary reason for the euro breakout last week was the European Central Bank (ECB), which failed to lay the foundation for a rate cut and suggested their policy toolbox is empty. These are hardly the words of an optimistic central bank, particularly since ECB President Mario Draghi also stressed the downside risks to the ECB’s outlook. A rate cut is still on the table, and without a single supervisory mechanism (SSM), other countries could fall victim to the same problems we saw most recently in Cyprus. In addition, we expect Eurozone growth to remain weak as austerity measures limit economic activity in the region.

Our view on the Korean won carries over to our view of many other Asian currencies as well. The Japanese yen has weakened significantly and is likely to get even weaker, which poses a significant threat to countries that compete with and export to Japan, which includes South Korea.

Japan is a leading competitor of South Korea in the market for high-tech manufactured goods, and the weakness in the yen coupled with the strength of the won hurts the attractiveness of Korean goods, which translates into weaker economic activity and a weaker currency.