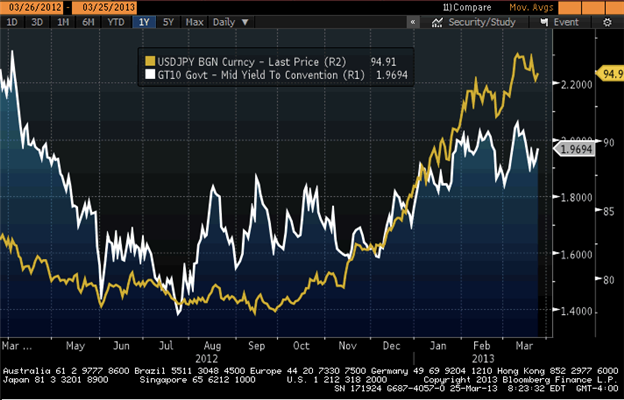 While longer-term gains are still possible, the combination of factors including yen repatriation, Bank of Japan (BoJ) policy measures, and US bond yields is likely to fuel a near-term correction in USDJPY.

The big story in the FX market today is the news that Cyprus effectively avoided the worst-case scenario of a default and forced exit out of the union by reaching a deal with the Eurogroup. While investors responded very positively to the news in Asia and early-European trading, the gains seen in the EURUSD have turned into losses near the start of the North American session.

The pullback wasn't caused by any contradictory news flow, which is always worrisome because it suggests that investors are not confident that the deal has eliminated the near-term risks for Europe. Banks in Cyprus are still closed and capital controls could remain in place "indefinitely" according to government officials.

While we feel that the losses in the EURUSD should be limited because this is the best deal the market could have hoped for, contagion concerns and risk aversion remain for the time being. Yet when the tensions in Europe begin to subside, FX traders will begin to shift their focus to fundamentals, and one of the currency pairs we are watching carefully is USDJPY, which looks vulnerable for losses for three distinct reasons:

March 31st marks the end of the fiscal year in Japan, and this means repatriation may be at hand. Japanese companies have a history of repatriating money from their subsidiaries abroad in the last two weeks of March in order to window dress their balance sheets. Traditionally, this has been positive for the yen.

The recent yen strength suggests that repatriation has already begun and could continue in the coming week. Repatriation flows alone won't cause a massive rally in the yen, but could be enough to drive USDJPY down to 94.

Last week's press conference by Bank of Japan (BoJ) Governor Haruhiko Kuroda and his two new deputies was their chance to impress. Unfortunately, instead of affirming their commitment to bold and aggressive easing, Kuroda sounded non-committal and unconvincing, which sent the yen soaring.

Kuroda’s comments led investors to believe that there will be no emergency meeting before the scheduled announcement on April 4 and decreased the chances for easing at the first BoJ meeting to 50-50.

The new BoJ Governor proved to be more thoughtful and could choose to take his time to thoroughly understand Japan's monetary policy options before taking action. Kuroda left all options open, saying "We have to implement more effective monetary easing, but we'll think about what at the policy board meeting."

While there is no question the BoJ will increase asset purchases next month, with a week and a half to go before the next monetary policy meeting, we expect to see consolidation and profit taking in the yen before that happens. Also, considering the amount of speculation and positioning that has built up in anticipation of additional easing, the new central bank may need to over-deliver to avoid disappointment.

See also: A USD/JPY Move That Defies the Data

3) US Yields May Remain Under Pressure

The overnight rally in the Nikkei and decline in US ten-year bond futures (rise in yields) has been supportive of USDJPY, but the pullback in the euro suggests that concerns in the financial markets have not been completely lifted by the Cyprus deal.

Italy still does not have a Prime Minister and Washington is gearing up for its next big battle on the debt ceiling. The US government is expected to reach the debt limit on May 19, and while funds could be moved around to pay near-term obligations, the debt ceiling will need to be increased this summer in order to avoid a default.

As shown on the chart below, USDJPY has maintained a tight correlation with US ten-year bond yields, and if yields continue to fall as a result of weaker data tomorrow, we could see a deeper correction in USDJPY as well.

US consumer confidence numbers are scheduled for release on Tuesday, and given the sharp decline reported by the University of Michigan consumer sentiment index, we anticipate a deep pullback in the Conference Board's report. (See the complete economic calendar here.)

While we don’t believe that the uptrend in USDJPY is completely over, for these three reasons, the pair could be vulnerable to a near-term correction before new highs are seen.