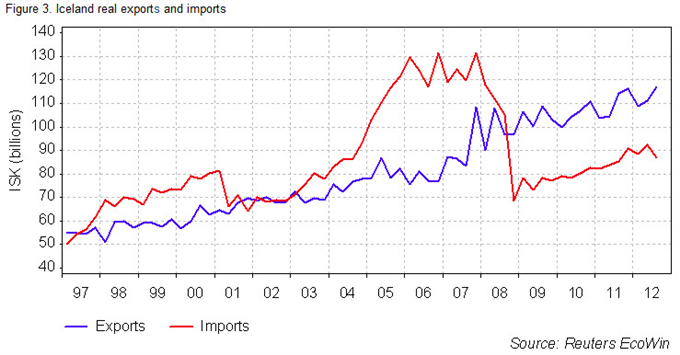 Eurostat recently published the European exports, imports, and trade balance for the first ten months of 2012 as compared to 2011. The data and recent market reactions show that the "Current Accountists" strategy from Angela Merkel and Hans-Werner Sinn was right. (Read more about the “Current Accountists” strategy on snbchf.com.)

First, the weak countries needed to reduce both fiscal and current account deficits, even at the cost of higher unemployment and lower growth. However, this strategy would have failed completely if the Fed had not decided to provide more money to fund the American housing markets and the European trade surpluses via U.S. consumer spending.

The “Lost Decade” in Latin America

A similar austerity strategy was applied in 1982 during the Latin American debt crisis, and while quite successful at the beginning, in the end, the Mexicans and others would fall victim to a lost decade and debt write-offs.

Regarding the Latin American Lost Decade: "In response to the crisis most nations abandoned their import substitution industrialization (ISI) models of economy and adopted an export-oriented industrialization strategy, usually the neoliberal strategy encouraged by the IMF, though there are exceptions such as Chile and Costa Rica who adopted reformist strategies. A massive process of capital outflow, particularly to the United States, served to depreciate the exchange rates, thereby raising the real interest rate. Real GDP growth rate for the region was only 2.3 percent between 1980 and 1985, but in per capita terms Latin America experienced negative growth of almost 9 percent. Between 1982 and 1985, Latin America paid back 108 billion dollars."

The Latin Americans had a weak currency to enforce their export-oriented industrialization, but the weak European countries do not have this advantage. On the other side, debt repayment is easier in a common currency, especially when sustained by longer-term repayment schedules. We are quite sure that the Latin American crisis could have ended far earlier if great parts of the debt would have been written off sooner, as done recently in Iceland and Greece, and as will potentially be done in Cyprus, Portugal, and Spain.

Typically, the economic outlook for weak countries begins to look better with improved trade figures. Iceland gives the very best picture of how to get out of a crisis with a weak currency. Exports strongly expanded and imports fell, generating current account surpluses. Icelanders let fail the banks and rejected demands to pay back the losses of Dutch and English investors.

By mid-2012, Iceland was regarded as one of Europe's primary success stories. It has had two years of positive economic growth, unemployment was down to 6.3%, and Iceland was attracting immigrants to fill jobs. Currency devaluation effectively reduced wages by 50%, making exports more competitive and imports more expensive. Ten year government bonds were issued below 6%, lower than some of the PIIGS (Portugal, Italy, Ireland, Greece, and Spain). Tryggvi Thor Herbertsson, a member of parliament, noted that adjustments via currency devaluations are less painful than government labor policies and negotiations.

The below graphic depicts the Eurozone trade balance data between January and October 2012 as compared to January through October 2011 based on Eurostat data. The graph shows the exports from the countries of the EU and from major trading partners to the EU compared with the change in the FX rate. 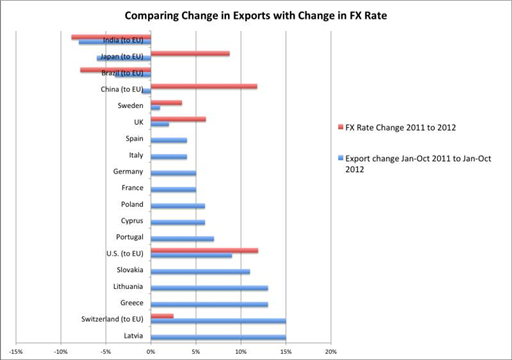 All listed euro countries improved their exports strongly, mainly because the euro fell to an average 1.26 US$ in the first 10 months of 2012, down from 1.41 in 2011. Apart from European Central Bank (ECB) president Mario Draghi talking up the euro, the stronger trade and current account balances helped the weak countries and the European currency to recover.

It can be seen that some emerging markets (and also Japan) spent and imported more while exporting less. Higher salaries caused European exports of India, Brazil, and China to fall, also accompanied by a falling rupee and real, even against the weak euro. As an exception, only the Chinese renmimbi appreciated. As a result, Chinese and other emerging market products became more expensive, and exports of countries with weak salaries like Latvia, Lithuania, Slovakia, and Greece, strongly improved and actually managed to substitute for those declining exports of Chinese products. Germany and France were able to profit more from the weak euro than Spain and Italy.

Switzerland managed to strongly increase exports to the Eurozone because its currency increased only a little and did not further appreciate. The U.S. managed to export far more despite a stronger dollar. The appreciating pound was rather counterproductive for the U.K. because imports rose more than exports.

The countries that showed the biggest improvements with regard to trade balance were Slovakia and Poland, thanks largely to the replacement of Chinese export products. The Swiss franc stopped appreciating, so the Swiss could strongly reduce their trade deficit with the Eurozone as well. (Read more about the Swiss trade surplus on snbchf.com.)

Portugal, Greece, and Spain were better off because imports and consumption strongly fell, only partially thanks to their weak salaries. The Japanese, Indian, and Brazilian trade deficits with the EU strongly increased because of higher consumer spending and slowing exports. China seems to have improved productivity, and despite rising salaries and a stronger renmimbi, the nation’s surplus with the EU has fallen only a bit. 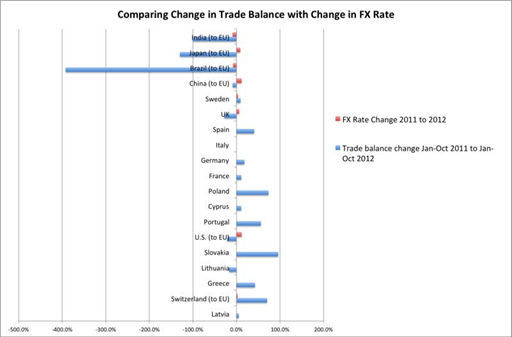 The euro has appreciated by 7% against the US dollar, 5% against the Swiss franc, Swedish krona, and Chinese renmimbi, and an astonishing 20% against the Japanese yen (basis September 01, 2012, when the EUR/USD was around 1.26, the average between January and October 2012).

Therefore, we see big risks that the strengthening in Greek and other peripheral exports will soon finish and the European trade balance with China will weaken again. The periphery needs to imitate Iceland and cannot live with a strong currency, even if Germany is ready to give them cheap loans and potentially take some haircuts. More and more unemployed workers will put a drag on these economies and eventually drain public finances.

Even the German trade surplus, which, like that of Switzerland, is usually relatively immune to exchange rate changes, is now in danger because the Japanese will be able to sell their cars 20% cheaper than Germany, at least when all components are produced in Japan.

We must not forget that only six Eurozone countries emerged strongly following the Great Recession: Germany, Finland, Austria, Estonia, Slovakia, and Luxembourg. This accounts for only 35% of the Eurozone population. Meanwhile, the other eleven countries (65% of the population) still have major issues, including France, which just posted a record-low PMI print, and the Netherlands and Belgium, which are still suffering from a real estate bust.Forex: Euro vs. Key Currencies, Sept. 2012 – Jan. 2013 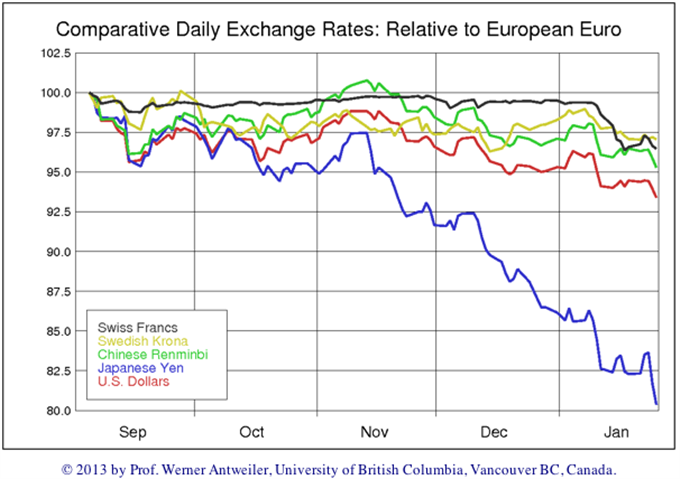 Sell in May and Go Away…Until October

Since the euro is strongly correlated with stocks, it seems clear that negative European trade balance and a weaker euro in the upcoming quarters will, once again, exacerbate the "sell in May and come back in October" effect (read more about this strategy on snbchf.com).

The slowing demand from Europe and Asia in Q3/Q4 2012 and rising oil prices from February/March 2013 will have finally affected the U.S. in the coming months, and we expect the EUR/USD to top out around 1.35/1.36 in March and then slide towards 1.30 around August/September, while the EUR/JPY will retreat even more strongly until September, potentially to levels around 110. Central banks that see their countries at a competitive disadvantage will then become a catalyst to a strengthening of the yen.

We predict that the U.S. ISM manufacturing purchasing manager index will not follow the good Markit stamp of 56.1, because all available local indices—New York, Kansas, Richmond, Philadelphia, and Chicago—have shown bad figures. We think that due (at least partially) to a continuing balance sheet recession, the U.S. recovery will not be the usual one.

The best point in time to initiate short positions would either be in January, or due to seasonal issues, shortly before the February ISM print. Positions might also be built up slowly alongside the recommended long positions.