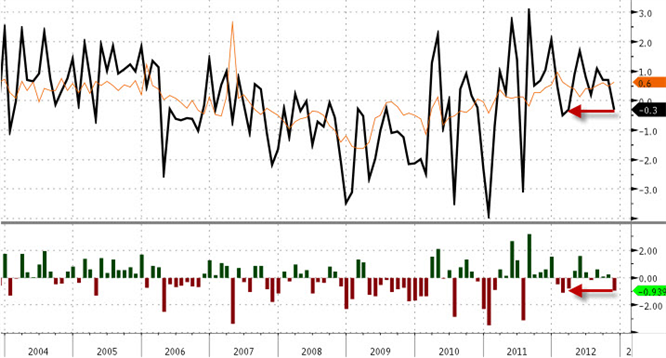 Guest Commentary: The Trade of the Year: Short USD/JPY

Like every year in Q4, analysts proudly present the end of the great recession:

2009: The big picture: The Great Recession is Over! Long Live the Ordinary Recession ….

2010: Mish Global Trend Analysis: The Great Recession is Over; Bad News: It Doesn't Feel Like It

2011: Forbes: Stand Up And Cheer! The Great Recession Is Over.

This year it is Russ Fisher's turn on Seeking Alpha:

While everyone has been preoccupied with government debt, deficit and dysfunction, the private economy has been moving steadily toward some remarkable improving trends.

Housing has made a surprisingly strong recovery. New housing permits were up nearly 27% last month to the highest level since July of 2008….

We are rapidly moving toward energy independence in America. Despite the empty promises of politicians for 40 years, the true solution is the result of relatively few individuals who developed horizontal drilling and hydraulic fracturing...

Yesterday I read an article in The Atlantic magazine about "Insourcing"...

The Federal Reserve is doing some things never done before. The U.S. central bank is buying residential mortgage backed securities….

I have been aware of, using, and talking about the Khan Academy for years.

This is the most amazing and promising thing that I have seen, perhaps, in my lifetime. Sal Khan is promising and delivering a world class education for anyone in the world for free….

We do not agree with Russ'opinion, because:

At the same time, money is currently leaving China and other emerging markets. Given that house prices have improved maybe too much in emerging markets, investors have discovered the United States as safe-haven. This helps to push up the against income undervalued US home prices. Despite price tendencies, new construction and jobs will be limited, oversupply and foreclosures still act as a drag.

Robert Shiller is not sure if this is just a temporary movement.

For us, higher house prices will amplify the recent rise in rents, which will increase inflation.

The IEA has regularly published very positive long-term reports, which in the end were not true, more details by Prof. Vaclav Smith.

The main issues we see, is that "What the shale oil boom has done is undeniably reduced U.S. dependence on expensive foreign oil, but the U.S. is still a long way from being energy independent." (source IAE).

Only the high oil and gas prices have made horizontal drilling affordable, but global demand and prices could rise more quickly than the additional U.S. supply. Higher prices might cancel out the effect of the smaller quantities imported by the U.S. and at the end have no effect on the U.S. current account balance. (By the way, we see a huge risk for the Chinese current account to become negative).

With rising Chinese wages, inflation and a 10% stronger Renmimbi (yuan) since 2010, the Chinese currency is not overvalued any more. This helps to insource US production.

American workers become a bit "Chinese", in the sense that American hourly real wages do not increase. Lower real wages, falling gas prices and increased industrial production help to boost margins and stock prices. On the other side, Chinese wages have risen strongly and have limited the performance of Chinese stocks in recent years. 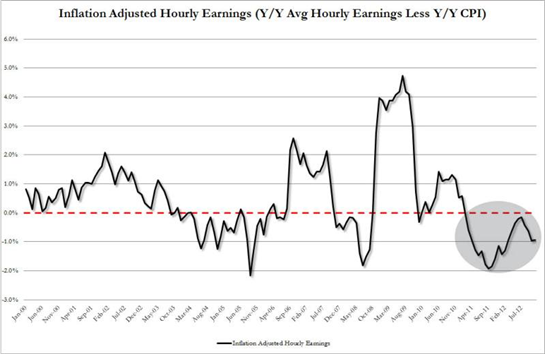 We do not doubt the nice increases in US industrial production and productivity , a good to beat underlying educational problems, but we wonder why despite all these improvements, the US trade deficit is still that big. 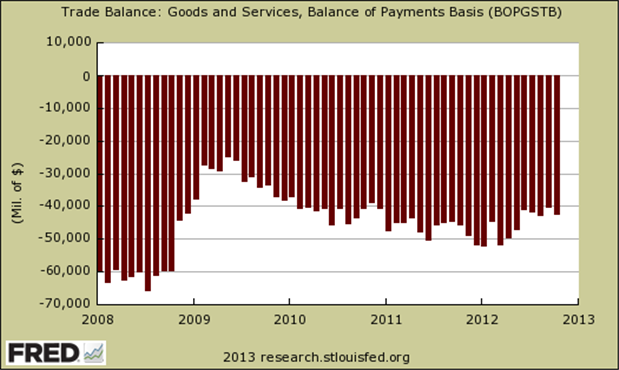 As for stocks, the question is now if all the expected rises in earnings are really sustainable. Potentially margins are nice but the sold quantity might lag behind expectations.

"2013 reported earnings are currentlyset at $100.71 for the S&P 500 by Standard & Poors. This would represent arise of 14% in the coming year from the current levels of $87.1 .. …given the increases in production costs during the past year…the consumer showing signs of strain as personal savings rates rapidly decline, as witnessed in recent quarters, leads to concerns about sustainability of margins in the coming quarters.” 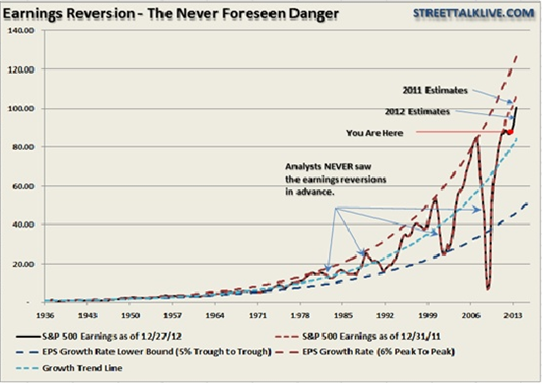 This leads to the question, "who is spending during this recovery?"

Higher house prices do not mean that consumers will spend, most might prefer to reduce debt, even if the Fed wants them to spend more, but at the same time increase debt. 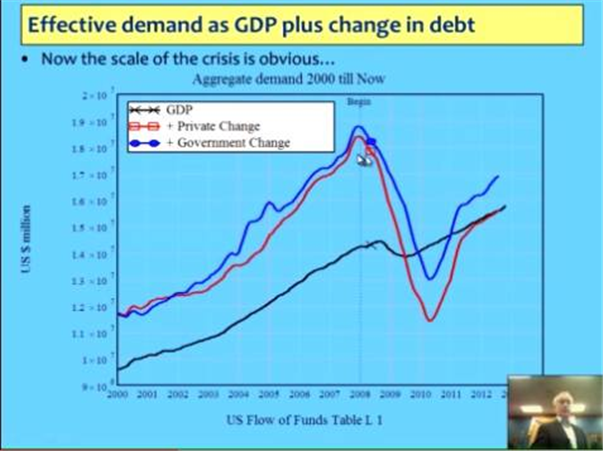 Europeans continue to live with severe austerity, euro zone GDP is expected to shrink in 2013. The US will not be able to hide, most probably Europe will slow American growth. 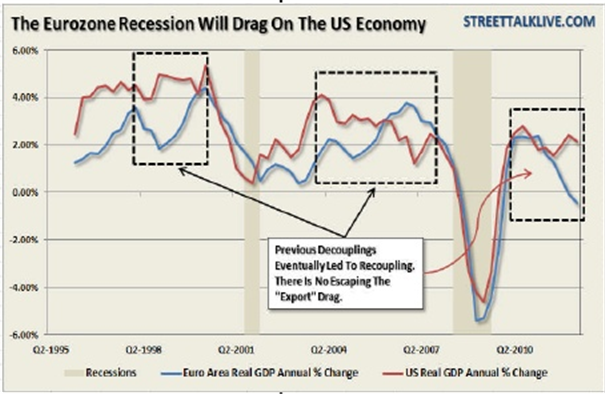 The lower-class in China and other emerging markets do not have the means to spend enough yet. A large part of the 3000 US$ average Chinese salary goes into strongly rising rents and food, with 20% becoming savings. A real middle-class with spending power does not exist yet, but will emerge in the next ten years. 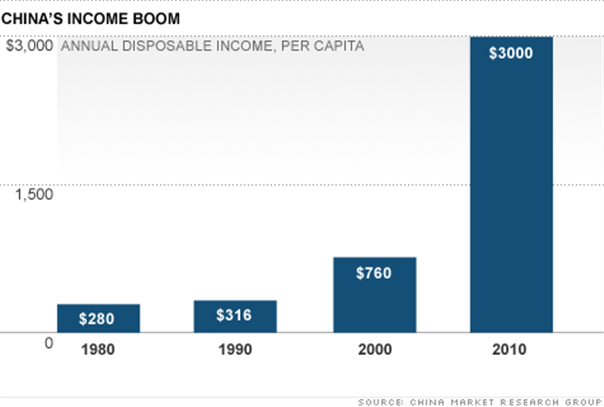 Thanks to reduced global spending and slowing emerging markets, gas and oil prices have not risen yet as much as they should have in a recovery, or like they did between February and April last year.

Last year's December to February Private Non Farm Payrolls were 220K, 285K and 233K, the December 2012 figure was 168K. We need jobs and sales, but this is not possible when everywhere in the world the economies are slowing. With seasonal effects job creation in May might slow to under 100K.

With falling real wages and low consumer spending, the Fed is in a comfortable position as for inflation pressures. Therefore, in August and September, central bankers were able to do the most desperate measures ever, QE-indefinite and implicit state financing via ECB's OMT, for now with success, even if most globalpurchasing manager indices are still contracting.

However, economic models like the IS-LM suggest that over the medium term, these measures lead to higher inflation.

For us, differences in education have created a split American society. Stock owners, employers and well-educated people take the profit. Ordinary workers work more and earn less in real terms, with a third group being those who are unemployed or out of the labor force completely. The U.S. consumers are still able to buy cheap products from Asia. This masks that with rising Asian demand, we might encounter the same supply-side issues as in the 1970s. Together with aging issues this might finally trigger the epic inflation, that will put in danger the heavily overloaded central bank balance sheets.

Last but not least, food stamps and health care spending drag on the US economy. These factors and the high number of people out of the labor force, are overseen even by full-blown anti-Keynesians like Kyle Bass, who judges that Japan will default in some years.

The Japanese might have an aging society, but it is better to work till 70 or 75 like the Japanese do and remain healthy than to pay out food stamps and expensive health care to a big part of the U.S. population. As for the big Japanese public deficit, it might be enough to raise the currently very low taxes (e.g. 5% VAT), if Japanese really decide to consume more and trigger some inflation risks.

In any case, Japanese investors and banks will continue to hold JGBs and finance the deficit. 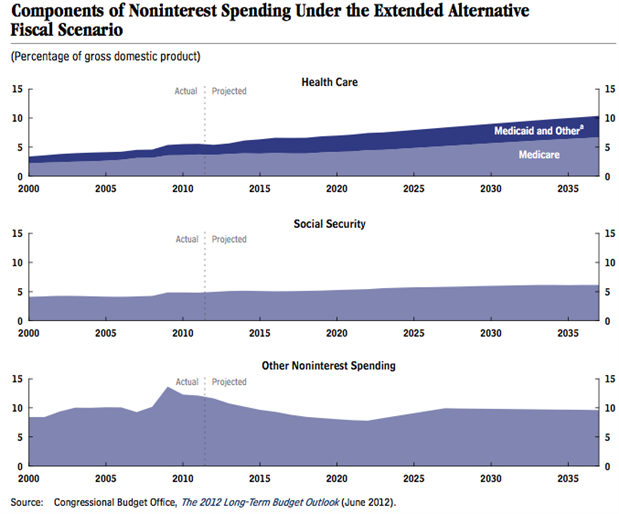 Here is another one about food stamps:

Latest estimates show that both Japan (finance ministry estimate) and the US should be the strongest G7 economy in 2013, both with +2%. We expect a strong Japanese current account surplus, also because Abe wants to replace expensive oil imports by cheap nuclear energy. This surplus will, similarly as between 2009 and 2011, lead to a falling USD/JPY exchange rate.

The weaker yen and continuing deflation has made Japanese exporters far more competitive. Here a calculation that shows that deflation allowed Japanese companies to produce at lower costs (according to producer price index, PPI, or the Japanese equivalent CGPI). Currently the USD/JPY is at the same level as three years ago, but:

The U.S. and a bit later a Chinese recovery will help Japan to increase the sales of its products, a tendancy still in place until 2011. 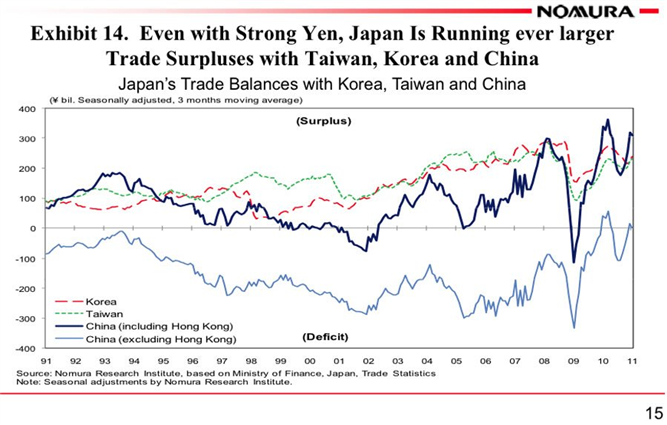 Monetary easing and the currently weak yen will not be sustainable, unless the Bank of Japan (BoJ) acquires big amounts of foreign assets like the Swiss SNB did; buying Japanese assets is not enough (see also Noah Smith's explanation). As the BoJ said many times: the size of the Japanese market is too big to buy huge foreign currency reserves with the risk of important losses.

For the third time in a row after 2010 and 2011, it must be repeated that this is not the usual recovery when construction helps to kickstart the economy. Seasonal effects, relatively cheap oil and gas prices and money printing have lifted the US economy in the recent months.

Thanks to the smaller differences in growth rate between the U.S. and emerging markets, we consider global growth to be slow but healthy over the next three to five years, unlike as in 2010 and 2011. Interestingly markets are happy when the US growth is strong and Asia is weak - like in 1998/1999 after the Asia crisis. But when Chinese and emerging markets improve far more than the U.S., then eventually everybody fears a recession and stock prices fall, last seen in Autumn 2011.

In 5 or 10 years time, a middle-class in China and other Asian emerging markets will finally emerge and consume. Boston Consulting Group speaks of another 160 million people in China, people who possibly do not possess a car today, but will earn at least 20000 US$ by 2020 and buy one. This will push up gas prices to levels of 5 or 6 dollar. U.S. unemployment will become smaller, because Chinese might produce a lot more for Chinese consumers. Given that the capital accumulation phase seems to be finished in China, we judge that productivity will slow and salaries will rise. 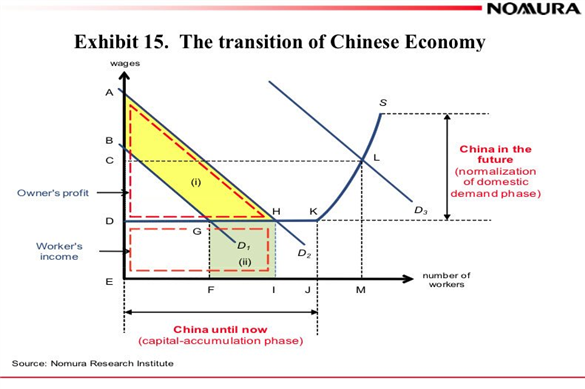 This Chinese consumption phase will increase inflation and potentially trigger the next big drop in stock prices.

We suggest to short USD/JPY, a position to be sold by the end of Q3/2013, by seasonal patterns, the yen is strong until September.

With a nice current account surplus Japanese exporters, trading algorithms and trend followers will drive the massive amount of short yen speculative holdings out of their positions. Because of the small interest rate difference between the US and Japan, Japanese investors will continue their home bias and hold yen.

We suggest building up the position slowly until the end of January, when the first bigger signs of a Japanese recovery in exports will show up. Our fundamental analysis cannot give an explicit price target.

Given that the recent indications of a capital flight might drag on China and other Asian economies and in particular on the won, we suggest to hedge our short USD/JPY position partially with a long USD/KRW position.