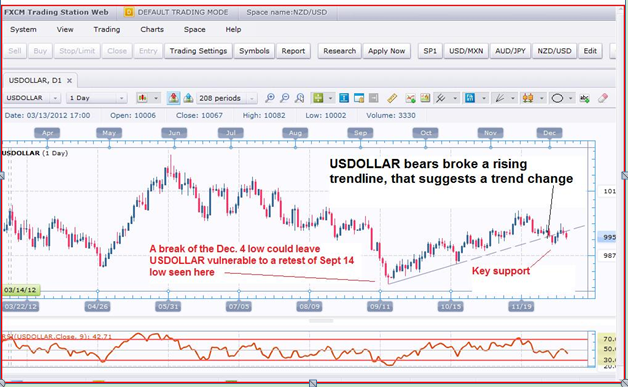 Only nimble and savvy short-term forex traders should attempt to play a knee-jerk reaction on Wednesday at the conclusion of the latest Federal Open Market Committee's (FOMC) two-day monetary policy meeting.

Nervous markets are moving on Tuesday as traders price in expectations of a Fed announcement to include an expansion of the QE3 program originated back in September. Stocks have rallied, the dollar (USDOLLAR) has weakened, and gold has surprisingly set back as well in early afternoon trade Tuesday. Traditional risk currencies, including Aussie and Kiwi are pushing higher.

While the open ended QE3 program initiated in September to purchase $40 billion per month of mortgage backed securities is expected to remain in place, a fresh form of bond buying or monetary policy accommodation is expected at the conclusion of this meeting.

The Fed's Operation Twist is set to expire at the end of December and Fed watchers expect a new and additional bond buying program of $45 billion, the same amount as the Twist program. However, while the Operation Twist program was balance sheet neutral, as it involved the simultaneous sale of short-term securities, which were offset by longer-term purchases, the new policy is expected to be outright sales only. That would bring the total to $85 billion per month.

The bottom line is that a new bond buying program of this nature would actually equate to greater monetary policy accommodation, or simply put — more quantitative easing.

While this has been widely expected in recent weeks, US dollar bears could well gain fresh momentum on confirmation of a new bond buying program. Generally, quantitative easing is seen as a factor in devaluing paper currency and a renewed bearish wave could be seen in the greenback on an announcement of this nature.

Looking back at the Fed's other quantitative easing programs, they have all been dollar bearish, stock bullish and gold bullish. However, there is a point of diminishing returns, and a stock rally, which is already long in the tooth could be short-lived.

There's an old market adage of "buy the rumor, sell the fact." There's a little bit of buying the rumor going on today, especially in the stock market.

NEW WAVE OF WEAKNESS FOR THE DOLLAR

However, the forex market will likely be the least forgiving when it comes to the "fact." It comes down to simple supply and demand. More quantitative easing equals more dollars, which equals more supply and lower prices.

USDOLLAR broke a rising bullish trendline, drawn off the September 14 daily low. The market has been testing that breakout, but the bearish shooting star on Dec. 7 reveals that the bears are in control. Additionally, the 9-day relative strength index (RSI) is trending lower in a bearish position.

The key level for traders to watch near term is the Dec. 4 swing low at 99.17. Confirmation of new monetary policy accommodation could be the trigger that sends USDOLLAR under that low. If the bears were to succeed in a sustained push under that low it could trigger a new down wave of selling that could ultimately see a retest of the Sept. 14 low at 97.40.

Short term players must be nimble and look to take quick profits on Wednesday's news. But, longer-term swing traders could see a new bearish objective in play for the U.S. dollar index.