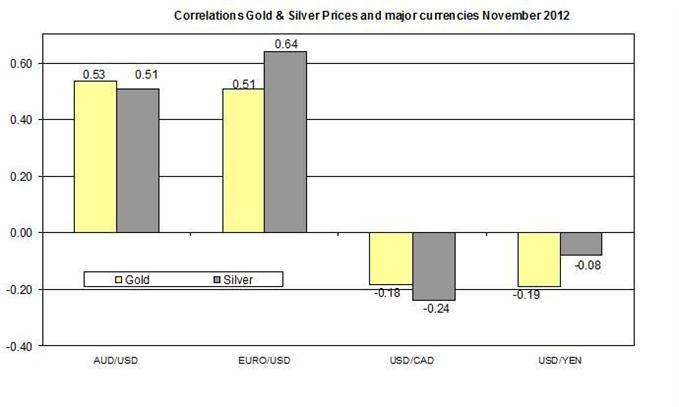 The recent fall of precious metals prices fall may have been stem by speculation around the U.S data: the recent reports show some signs of progress in the U.S economy such as the rise in the core durable goods. Some reports weren't too positive, e.g. new home sales slightly declined in October. The upcoming reports regarding the U.S GDP might shed some light about the progress of the U.S economy and thus may also affect precious metals. Moreover, the ongoing talks in Congress regarding the budget cuts to avoid the fiscal cliff are also adding the volatility in the commodities markets by raising the speculations in these markets. On today's agenda: Second U.S GDP 3Q 2012 Estimate, U.S. Jobless Claims, Governor King speaks, Italian 10 Year Bond Auction and U.S. Pending Home Sales.

On Wednesday, the Euro/ USD edged up by 0.07% to 1.2953. Moreover, some currencies such as Aussie dollar slightly appreciated yesterday against the USD by 0.31%. This little movement could suggest the changes in the currencies markets had little effect on precious metals. The correlations among gold, Euro and Aussie are still strong and positive. Thus, if the Euro and other risk currencies will continue to trade up against the USD, they are likely to pull up gold and silver.

Second U.S GDP 3Q 2012 Report: In the preliminary estimate, the U.S GDP during the third quarter expanded by 2%; in the 2Q2012 the GDP growth rate reached only 1.3% (annual rate). This presents a modest rise in the growth rate for the US's GDP. If there will be a sharp change in the growth rate from first to second estimate, this could affect not only the US dollar but also commodities rates. Moreover, if the GDP growth rate will rise, it could lower the chances of the FOMC intervening again the U.S financial markets;

U.S. Jobless Claims Weekly Report: in the previous report the jobless claims declined by 41k to reach 410k; this upcoming weekly update may affect the U.S dollar and consequently commodities;

For further reading: Why Isn't Gold Pulling Up?