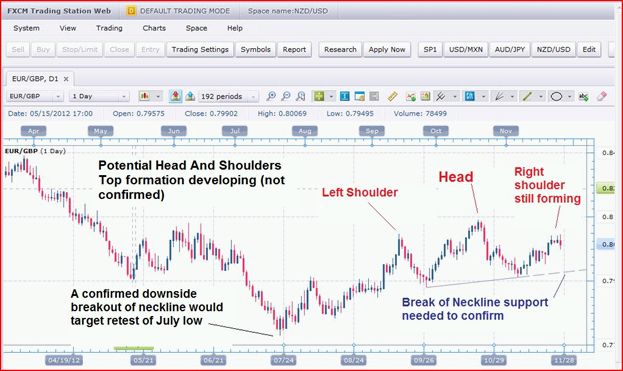 Guest Commentary:It's An Ugly Contest—But Sterling Could Have The Edge

Trying to pick a winner between euro/sterling fundamentals could easily be called the "least ugly contest" right now. Both the UK and the Euro-zone have faced massive economic challenges in recent months and years and neither economy sees particularly bright prospects in 2013. Nonetheless, with potentially better growth differentials in the months ahead, sterling could take the lead in the euro/sterling action. Looking at 2013 real GDP comparisons Nomura forecast a -0.8% contraction in the euro area next year, versus modest 2013 UK growth of 0.4%. Admittedly, 0.4% is not that great, but it is not recession.

TREND REVERSAL IN OUR MIDST?

Taking a look at the daily chart, seen in Figure 1 below, the euro has been gaining versus the sterling in recent months. However, a potential head and shoulders top formation is in the works on the daily chart. This major reversal pattern has not yet been confirmed, but it is worth putting on your radar screen.

How do these patterns work? Head and shoulders are a major reversal formation within pattern analysis. They form usually over a several month period and include a "left shoulder," a "head" and a "right shoulder." Technical traders draw a trendline, or so-called "neckline" under the two shoulders to monitor the pattern development.

In order to actually confirm a "top" to the recent euro/sterling rally run at the October peak, the pair would need to sell-off and close under the neckline support seen on Figure 1. I drew the neckline off the September 27 and November 8 swing lows.

For those traders looking to initiate a longer-term short euro/long sterling play, an entry point could be on a confirmed break of neckline support, which is currently around .7975 but is rising every day. Two consecutive settlements under the neckline can be used for an entry point to avoid whipsaw action around the trendline.

A stop could be placed just above the neckline. Given that this is a major pattern it is not uncommon for a market to come back and retest neckline support even after a breakout. Also, in light of the longer-term trade objective, it could be wise to give the trade a little bit of room on stop placement.

In terms of targets or downside objectives, technical traders simply measure the widest point of the pattern from the head to the neckline and apply that amount to the breakout point. The measured move objective comes in around .7757, which almost matches exactly the July 23 .7756 major low for the pair.

Funny how that works now isn't it.

If euro/sterling does crack neckline support in the days or weeks ahead and heads back for a retest of the July low, it really would be a continuation of a longer-term bear trend that has been in play since December 2008. Take a look at a monthly chart to see that downtrend.

However, on an approach of the June low, heightened volatility could be seen in the pair. Traders in a short euro/sterling play may want to book partial profits on the way down. Risk management and position sizing are both essential ingredients for success in any trader's playbook.

Slightly better growth fundamentals could give sterling the edge in the least ugly contest and the developing head and shoulders pattern is worth keeping an eye on. The pattern offers clear entry and also "when you're wrong" points as well as a specific profit objective.

By Kira Brecht is managing editor at TraderPlanet.com Follow us @TraderPlanet