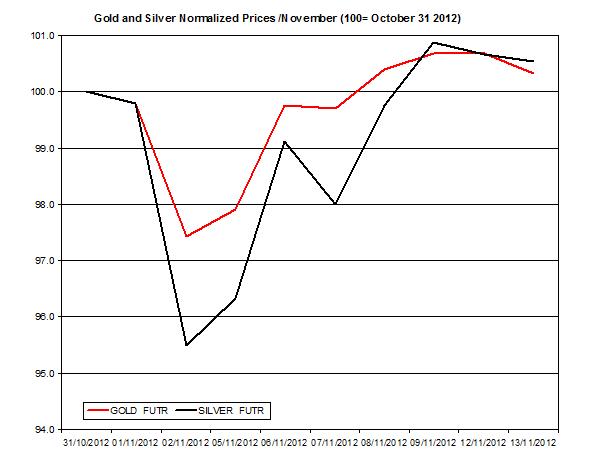 On Tuesday, Gold declined by 0.35% and settled at $1,724.8; Silver also declined by 0.12% to $32.49. During November, gold rose by 0.33%; silver, by 0.54%. As seen below, the chart presents the developments in the normalized prices of bullion during November (normalized to 100 as of October 31st). During recent days, both gold and silver bounced back after they had declined during the beginning of the month.

Minutes of FOMC Meeting: Following the October FOMC meeting, in which the Fed left its policy unchanged, the prices of bullion didn't move much didn't have a strong reaction to this news – gold and silver slightly declined on the day of the announcement. The minutes of the recent FOMC meeting might add some additional insight behind this non-decision and more important the potential future steps of the FOMC especially after the U.S Presidential elections, the upcoming decision to be made regarding the U.S fiscal cliff and the upcoming FOMC meeting at the middle of December;

U.S. PPI: This report will present the developments in the PPI during October 2012, i.e. the inflation rate from the producers' stand point. In the latest report regarding September this index for finished goods hiked again by 1.1% compared with August's rate and by 2.1% in the last 12 months; this news might affect commodities prices;

Precious metals resumed their downward trend in recent days and might continue on this slow descent in the days to follow. The little headway in the recent EU summits didn't help move the Euro up and consequentially might have also contributed to the decline of gold and silver. The upcoming U.S reports including U.S PPI, and retail sales might affect the USD and commodities prices as specified above. . The upcoming publication of the minutes of the FOMC meeting might positively affect bullion prices if the minutes will hint of near future actions the Fed plans to take in order to jumpstart the economy. The continuous slow trading in the forex market was also reflected in the low volatility in the precious metals market. Thus if the Euro and other "risk currencies" will continue to depreciate against the USD, then they are likely to drag down precious metals.

For further reading: Gold And Silver Outlook For November 12-16