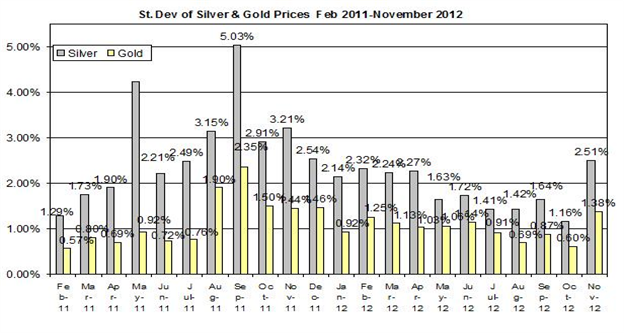 The prices of gold and silver changed direction and declined on Wednesday along with other assets including crude oil, natural gas and stock markets. The hype over the elections of the incumbent President Obama for a second term didn't last long as the markets tumbled down yesterday. All eyes in the U.S are on the next move of the U.S government in regards to the "fiscal cliff". In the mean time, the market interest is likely to shift back today to Europe and the debt crisis. On today's agenda: Euro-group Meeting, ECB Rate Decision, Great Britain Bank Rate & Asset Purchase Plan, Canadian Trade Balance, American Trade Balance, U.S. Jobless Claims, RBA Monetary Policy Statement and China's CPI.

Euro-group Meeting: The Euro-group Meeting will be held in Brussels and the EU ministers of finance will talk over the recent political and monetary developments in Europe; in the last meeting there was little headway and the market didn't react to the news coming out of this meeting;

ECB Rate Decision: last month, the interest rate remained unchanged. Since many EU countries are still struggling, and since the FOMC announced in September of QE3, ECB might decide to make another rate reduction in the near future by another 0.25pp. If ECB will cut the rate again, it may affect the Euro;

American Trade Balance: This monthly report for September will show the recent shifts in imports and exports of goods and services to and from the U.S, including commodities; according to the previous American trade balance report regarding August the goods and services deficit rose during the month to $44.2 billion;

The volatility of the precious metals prices has risen in recent days perhaps due to the market reaction to the U.S Presidential elections. Thus, the volatility might decline in the days to follow. Today's Euro-group meeting and ECB rate decision could affect the Euro if there will be big headlines coming out of any of these events. I think ECB will eventually make another rate cut but this might not happen this time; the Euro-group meeting won't bring any big headlines. Finally, if the Euro and other "risk currencies" will continue to dwindle against the USD, then they are likely to negatively affect precious metals.

For further reading: Gold and Silver Prices Outlook for November