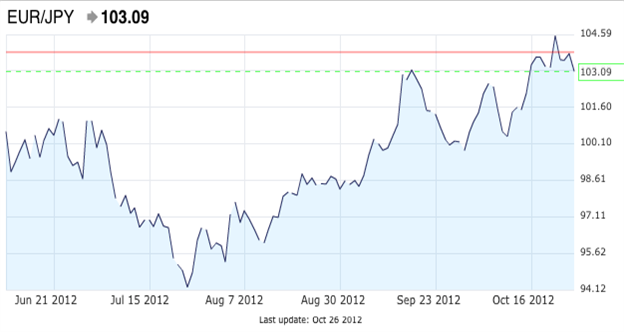 Guest Commentary: Why we are so very long the yen

Yesterday's surprisingly high Japanese CPI data (only 0.1% deflation YoY) reversed the negative sentiment towards the Japanese yen. As Christopher Vecchio explains, the stronger yen might cause also a fall in all risk-assets.

We do not believe in the mainstream bushwah that argues that the yen is overvalued.

A couple of months ago the euro traded close to EUR/USD 1.20 and the whole world was betting on its breakdown. We recommended to go long EUR in August on Seeking Alpha, based on the positive European current account data.

Once the euro downtrend ended thanks to QE3, OMT and the positive euro zone current account, the common currency did not stop to appreciate against the yen and reached levels of EUR/JPY 104 and above. Many short euro positions were short-covered and pushed the common currency even further up.

Our latest mid-term recommendation Short EUR/JPY at 102 on October 8 was lagging, but our shorts on metals and on Brent are strongly winning trades. We doubled our EUR/JPY Short at 104 this Tuesday. We wondered, how the yen could fall despite its negative correlation with commodities, especially with Brent?

Why are we short euro now and were long some months ago?

Fundamentally only little has changed. At EUR/USD of 1.22 or 1.23 the euro was undervalued and we went long EUR/USD. But now the common currency is now overvalued against the yen given that European consumers stopped spending.

Does the weak Japanese trade balance have an influence?

Not really a lot, for three reasons:

We strongly suggest that Japanese will continue to consume and that Europeans will keep their austerity path.

Japan will be able to reduce the trade deficit, but consumer spending will push the Japanese GDP upwards. 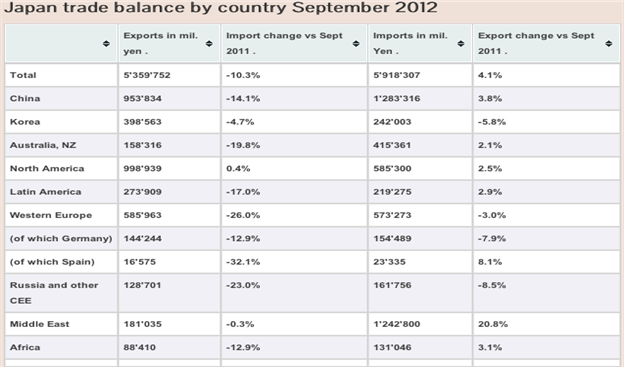 The following table shows once again how surprisingly irrelevant FX rates are for trade balances over the long-term (see details). Just after the Fukushima shock Japan started to see a trade deficit due to higher oil imports. 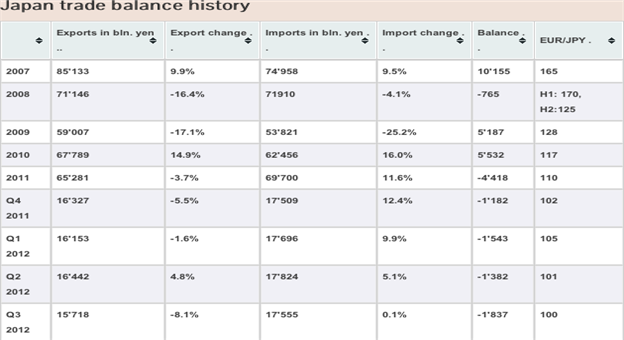 Is the yen overvalued?

"Prices have turned out weaker than the BOJ expected and the economy is slowing more than the bank anticipated, with both exports and domestic demand weakening," said Yoshimasa Maruyama, chief economist at Itochu Economic Research Institute in Tokyo.

"As such, I expect the BOJ will top up its asset-buying program by 10 trillion yen next week as it comes under pressure from the real economy as well as from politics."

For the better part of the past decade the world's third-largest economy has been caught up in the vicious circle of price declines that discourage investment and make consumers put off spending, which in turn weighs on demand and output. (source Reuters)

As opposed to the United States and China, Japan has seen deflation over the last two years. Even if the USD/JPY has fallen by 5%, from 84 to 80 since September 2010, deflation allowed Japanese companies to produce at lower costs (according to producer price index, PPI, or the Japanese CGPI):

Given that neither the ECB nor the Fed will hike interest rates soon, it is a clear case:

EUR/JPY and probably also USD/JPY will fall in the next months.