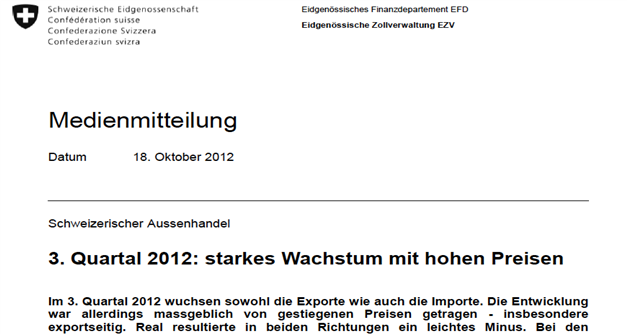 Swiss Exports Rise Thanks to Higher Export Prices. Sorry, What ????

Last week the Swiss export data for the third quarter was released. The news agency report was simple:

“Exports from Switzerland fell by a real 8.0 percent in September to 16.49 billion Swiss francs ($17.87 billion), the Federal Customs Office said on Thursday.

The mainstream banks iterated what the big bosses from the SNB want to hear:

'There is no collapse but also no surge in exports. It's still a mixed picture. We are seeing improvements in the euro zone so probably we will see some stabilization of exports, but we will also probably still have to wait for higher demand from the euro zone so the Swiss National Bank's floor for the euro-Swiss franc is still justified.'

(We know that if Credit Suisse didn't say this, they might get bashed by the SNB again and need to raise further capital :) )

None of the news agencies cited the official title from the Swiss customs administration:

In the third quarter 2012 both exports and imports increased. The development was strongly driven by higher prices, especially on the export side...

I am sorry, wasn't this the country, where the central bank kept on insisting for years that its currency is overvalued?

Export prices rise more than import prices? So it is not only the weaker franc against the dollar… They really increased prices even in USD and EUR terms … The world economy was collapsing and they raise prices...

How can Swiss exporters dare to do this, how can they even think about raising export prices?

How can the Swiss trading partners be so stupid to buy these expensive products and pay higher prices in an overvalued currency?

Didn't they listen to the Swiss ueber guru Dr Jordan, who has been telling the foreign exchange market for years that the Swiss franc is overvalued and that with time it will depreciate again? Instead of listening to the guru, the franc kept on rising until the SNB went for a last resort of a EUR/CHF minimum rate.

Let's look at some details of the trade balance (source German and French press release): 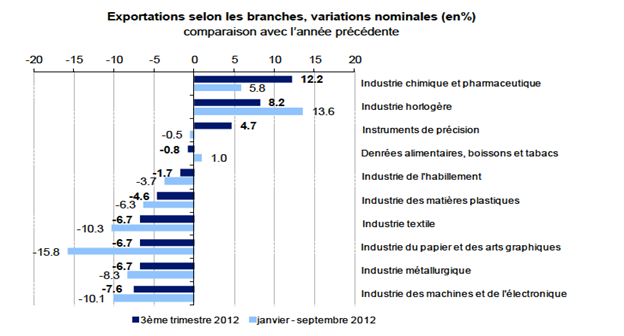 Despite the smaller total value of exports, "the majority of industries showed strongly higher prices". By far the biggest industry with 40% of total export revenue was the chemical and pharmaceutical industry, which expanded by 12.2% in the Q3 against the previous year and by 5.8% in the months January to September. Machinery and electronics (16% of total exports) and the metallurgical industry (5.7% of total exports), both organized in the Swissmem organization, however, contracted.

So, are these Swissmem guys the ones who are taking the Swiss tax payer hostage? Tax contributors will pay up 15% of GDP for the SNB losses, when inflation finally picks up again.

Are these the guys who were not able to innovate, when Forex traders used the undervalued franc as a financing currency during the carry trade era?

Are these the guys who got used to the SNB sugar policy between 2005 and 2008? When the central bank offered 0.75% cheaper rates than the ECB, even if the Swiss economy rose more strongly than the Euro zone. 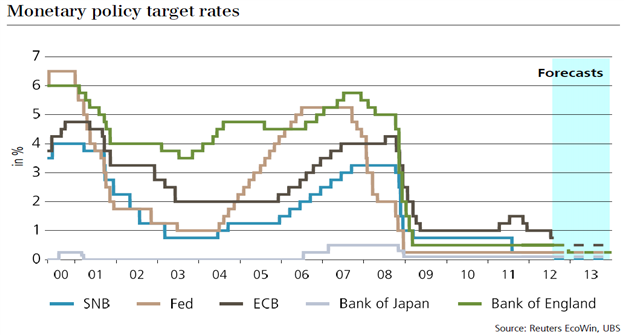 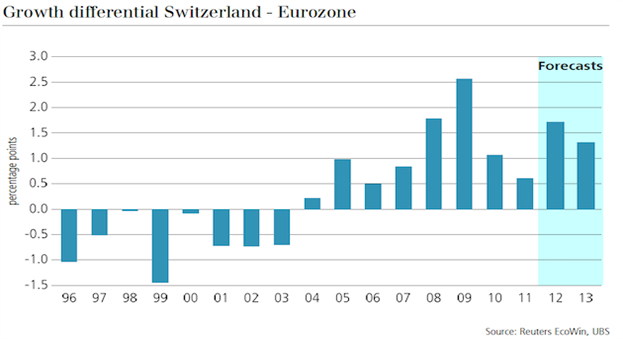 Time to calm down; at least the higher export prices have proven the first of our far more serious papers:

Why the Swiss franc is correctly valued or even undervalued according to Purchasing Power Parity based on producer price indices (PPP-PPI), see here.

The only chance for the SNB to make a profit on currency reserves is when there is much stronger growth in the Euro zone than in Switzerland and clearly higher ECB rates. Otherwise 93 billion francs or 15% of GDP loss are looming. See here.

Last but not least, our suspicion that the SNB might influence not only the mainstream banks but also Swiss government agencies has been proven to be wrong.