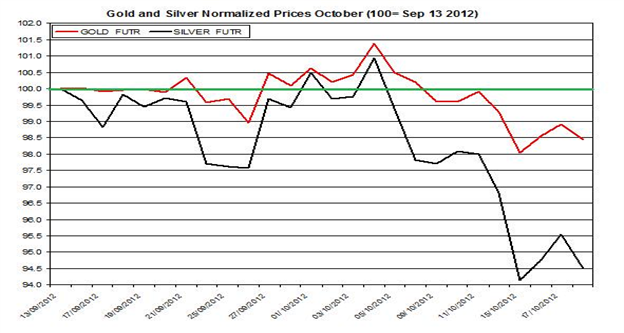 The prices of gold and silver changed direction again and slightly declined on Thursday after both precious metals had increased in the previous two days. Their recent decline coincided with the fall of the Euro and other "risk currencies" such as Canadian dollar against the USD. U.S jobless claims changed direction and rose last week by 46k to 388k. The Philly Fed index rose again in October and turned positive for the first time in six months. This news may have contributed to the fall in the prices of bullion yesterday. Today will be the second day into the EU Summit. Up to now, the forex and commodities markets are still waiting for any headlines from this Summit. In the meantime, Spanish yields fell yesterday on long term bond to their lowest level since April. Today the EU Economic Summit will start and could have a strong effect on the Euro and commodities prices. This improvement in yields lowers the chances of Spain making a request for ECB bailout today. Other items on today's agenda: Canada's CPI, and U.S. Existing Home Sales.

Canada's CPI: This report will refer to the CPI and core consumer price index (controlling the volatile components such as energy, fruit and vegetables) for September 2012. According to the Canadian CPI report for August 2012, the CPI rose by 1.2% during the past 12 month up to August – this is a slightly lower rate than in July. This report might affect the Canadian dollar, which is also strongly correlated with commodities prices;

U.S. Existing Home Sales: in the previous report regarding August 2012 the number of homes sold rose: the seasonally adjusted annual rate of 4.82 million home sales; if this trend will continue it may help rally the U.S dollar.

The prices of precious metals continue to zigzag with an unclear trend but may end this week on a negative note unless if the Euro, Aussie dollar and Canadian dollar will appreciate against the USD. This may occur mainly if the EU Summit will pose some optimism regarding the EU debt crisis. Finally, today's publication of U.S existing home sales could adversely affect the prices of precious metals if the report will be positive, much like the recent housing starts report.

For further reading: Will Gold Continue to Dwindle?