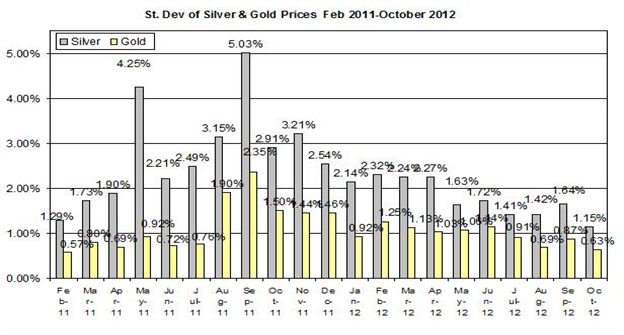 The prices of precious metals changed direction and bounced back from their recent downward trend. Their recent rise coincided with the rally of the Euro and other "risk currencies". The U.S CPI rose by 0.6% during September. The core CPI rose by only 0.1%. There are speculations around the growth of China's economy. According to the recent TIC report, the demand of foreigners for U.S treasuries rose in August by a net of $91.4 billion. This news may suggest that investors are more risk averse. Today's (late at night) GDP report for Q3 may shed some light on China's progress. Tomorrow, the EU Economic Summit will commence and could have a strong effect on the Euro and commodities prices. On today's agenda: Claimant Count Change, Minutes of MPC Meeting, and U.S. Housing Starts and Building Permits.

The slow movement of both bullion rates is represented in the low volatility of precious metals prices' during October: the standard deviations of gold and silver (daily percent changes) reached 0.63% and 1.15%, respectively. These figures are the lowest during 2012.

U.S. Housing Starts: this report was historically correlated with gold– as housing starts rise, gold price tended to decline the next day (even when controlling to the U.S dollar effect); in the previous report, the adjusted annual rate reached 733,000 in August 2012, which was 2.3% above July’s rate;

China's Q3 GDP: in the second quarter of 2012, China expanded by only 7.6% in annual terms; the current expectations are that the Q3 2012 grew in annul terms may even further fall; if the growth rate will be lower than in the previous quarter it may adversely affect commodities;

There are still concerns around the future growth of China, among the leading economies in importing gold. Today's publication of China's GDP could shed some light on this matter. Today's publication of U.S housing starts could affect the USD and bullion prices. If the U.S will continue to show signs of progress, then the price of gold may fall. The upcoming EU Summit that will start tomorrow is likely to affect not only the forex market, but also commodities prices. Finally, if the Euro and other "risk currencies" will continue to rise, then they could also pull up precious metals.

For further reading: Gold And Silver | Weekly Outlook for October 15-19