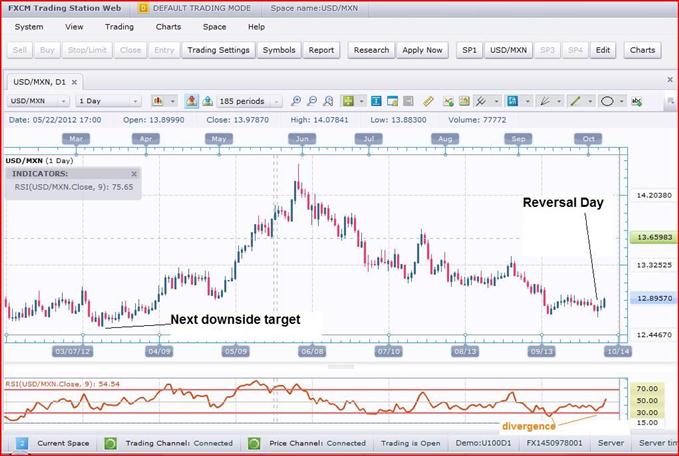 Guest Commentary: Listen to the Music of the Markets—MXN Peso Divergence

With the Brazilian real basically off limits to speculators thanks to aggressive intervention by authorities there, the Mexican peso has become the latest darling of the trend following crowd.

Indeed in recent months the peso has delivered. The Mexican peso has been on a tear gaining over 13% from June 1 to October 5, versus the U.S. dollar.

Bolstered by underlying bullish fundamentals—with Mexican GDP estimates in the 3.5-4.0% range for 2012 and an attractive official monetary policy rate at 4.50%, the peso has garnered a lot of attention in recent weeks. Speculative peso long positions remain at elevated levels as of early October, which leaves the currency vulnerable to some quick exits on a spike in Euro-zone worries.

While the longer-term fundamental outlook remains fairly solid, short-term technicals reveal the market has become overextended and simply needs a breather. Markets don't go up or down in a straight line and corrections are actually healthy for the underlying trend.

Within technical analysis the themes of confirmation and divergence are of utmost importance.

Stemming from the roots of Dow Theory, with the key tenet of "the averages must confirm" successful traders utilize the principles of confirmation and divergence in all aspects of their trading.

A current look at the U.S. dollar/peso (USD/MXN) chart reveals several recent technical signals worth watching. The peso appreciation trend may be taking a pause short-term. But, any additional rally gains in USD/MXN will be merely corrective to the dominant downtrend (which reflects an appreciation of the peso). Barring a complete blow-up of euro-zone worries again, rallies will be short-lived and offer selling opportunities.

ANATOMY OF A CHART

Action from employment Friday Oct. 5 marked a short-term bottom on the USD/MXN chart. First, technical traders will recognize the "reversal day" action in which the market hit a new recent low at 12.66 intraday, but then reversed to a higher close. That is one-day bottom reversal formation.

Next up, seen below the chart the 9-day relative strength index (RSI), a widely watched momentum indicator. Notice how the 9-day RSI hit a higher high on Oct. 5, while the USD/MXN hit a lower price intraday—there you have a classic bullish divergence. Momentum is signaling that the market was oversold and needed a breather. The divergence confirmed it.

Very short-term, the market may continue to edge modestly higher, heightened euro-zone worries are a negative for the Mexican peso and all risk assets. Initial resistance lies at 12.95, with another ceiling at 13.08.

Into year-end, however, the U.S. (for now) is chugging along with its moderate growth outlook. About 70% of Mexican exports end up in the U.S. and on a relative growth differential basis, Mexico appears well positioned. While U.S. growth may not be spectacular, it compares well to the recessionary outlook for the Euro-zone and the slowing growth picture for Asia, especially China.

LISTEN TO THE MARKETS

Successful traders listen to the music of the markets—or the signals on the chart. Don't try to force trades with your opinions, let the market tell you where it wants to go. Right now the peso needs to let off a little steam, but once that is finished the next targets are the 12.55 area from March 2012 and then the 12.00 level.