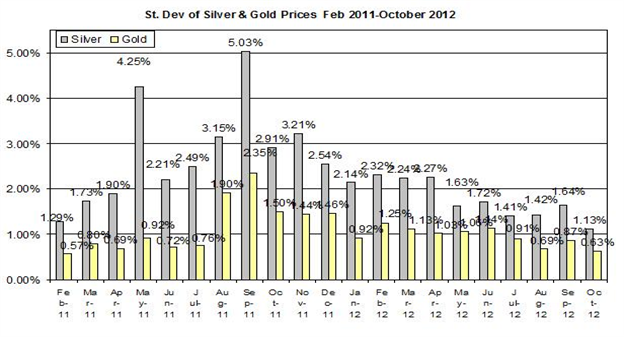 The prices of gold and silver were traded down again for the second consecutive business day. Other commodities prices, such as oil, and the Euro/USD also declined on the first day of the week. On the other hand, several "risk currencies" such as the Canadian dollar and Aussie dollar traded up against the USD. In Europe, there are mixed messages regarding Spain's bailout. Until this issue will be resolved, I suspect the uncertainty around the Euro will remain high. According to the IMF the world economy will grow by only 3.3% in 2012 – the slowest growth rate since 2009. The IMF revised down its projection from 3.5%. This news may pull down commodities prices. Merkel will visit Athens today; perhaps following this visit some light will be shed on Germany's position vis-à-vis the Greek debt crisis and possible delay in payments. Today, ECB President Speaks and Great Britain Manufacturing Production.

ECB President Speaks: Mario Draghi will talk in Committee on Economic and Monetary Affairs of the European Parliament, in Brussels. In his speech he might refer to the future monetary steps the ECB. This speech might affect the Euro;

Great Britain Manufacturing Production: this report will present the yearly rate of GB's manufacturing production for August; in the last report regarding July the index rose by 3.2% (M-2-M); this news may affect the British Pound;

The Euro/ USD also declined on Monday by 0.55% to 1.2968. On the other hand, several currencies including AUD appreciated last week against the USD by 0.04%. The correlation between gold and Euro remains mid-strong and positive: during September-October, the linear correlation between the gold and EURO/USD reached 0.623 (daily percent changes); the linear correlation between the gold and AUD/USD was 0.69 (daily percent changes). Following yesterday's mixed trend in the forex markets in which the Euro depreciated while the Aussie dollar and CAD appreciated against the USD, this could contributed to the unclear trend of precious metals prices. Nonetheless, if the Euro and other risk currencies will rally, they are likely to also pull up gold and silver.

The uncertainty in Europe mainly vis-à-vis the bailout of Spain and Greece's debt crisis is likely to affect the Euro and other "risk currencies". Merkel's meetings in Greece may shed some light on the German stand regarding Greece's debt payments. ECB's Mario Draghi speech could also affect the Euro, if he will refer to ECB's future steps mainly in regards to Spain and Greece. Finally, if the Euro and other "risk currencies" will bounce back today, then they are likely to pull up bullion rates.