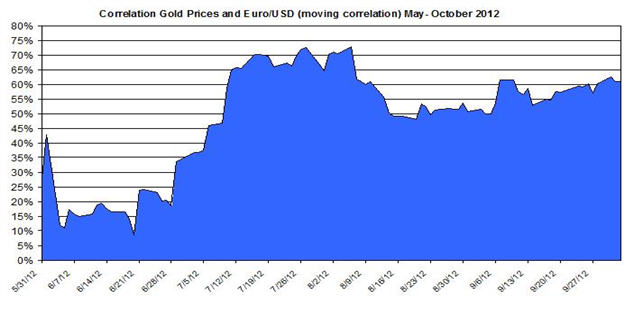 The prices gold and silver continue to shift with an unclear trend as both precious metals changed direction and edged up on Wednesday. Both precious metals have been zigzagging with unclear since September 13th, following the announcement of the Fed to launch QE3. Yesterday, the U.S non-manufacturing PMI report came out: the index rose again to 55.1, which means the non-manufacturing PMI sector continued to grow at a slightly faster pace. The ADP estimated that number of new jobs added in the U.S during September was 162k. If these figures will be close to the numbers presented tomorrow in the U.S non-farm payroll report, then this could help rally commodities and stock prices. On today's agenda include: Minutes of September's FOMC Meeting, Great Britain Bank Rate & Asset Purchase Plan, ECB Euro Rate Decision, U.S. Jobless Claims, Bank of Japan – Rate Decision, French 10 Year Bond Auction.

ECB Euro Rate Decision: Since many EU countries are still struggling, and since the FOMC decided on QE3, ECB might decide to make another rate cut in the near future by another 0.25pp. If ECB will cut the rate again, it may affect the Euro;

U.S. Jobless Claims: in the latest report the jobless claims declined by 26k to 359,000; this upcoming weekly report may affect the USD and consequently the rates of commodities;

The Euro/ USD slipped on Wednesday by 0.12% to 1.2905. Further, other currencies including AUD and CAD also depreciated yesterday against the USD. As seen below, the linear correction between the Euro/USD and gold remained around the 0.6-0.7 in the past couple of months. If these currencies and the Euro will continue to trade up against the USD, then they are likely to pull up gold and silver.

The upcoming publications of the minutes of the FOMC meeting could affect the prices of bullion. If the minutes will show that the FOMC may consider additional monetary steps in the near future, then they are likely to pull up bullion. The upcoming rate decisions mainly of BOE and ECB could adversely affect the British Pound and Euro, respectively, if these central banks will decide to lower their rates or if BOE will announce of a rise in its asset purchase plan. Such decisions, in turn, are likely to pull down the rates of precious metals. The ongoing speculation around Spain's next move could affect not only the Euro, but also bullion rates. Today's publication of the U.S. Jobless Claims could affect the USD, stocks and commodities if the report will show sharp drop in number of jobless claims.

For further reading: Gold and Silver Outlook for October