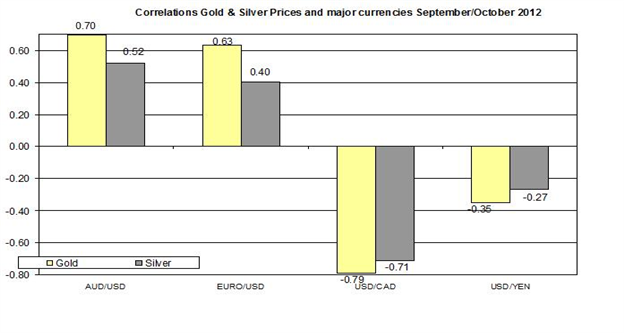 The prices gold and silver changed direction again, much like in the past couple of weeks, and declined. The prices of precious metals have shifted with an unclear trend in the past couple of weeks. The recent decision of the RBA to cut its cash rate by 0.25pp to 3.25%, which is still its lowest level since 2009, dragged down the Aussie dollar, which may have also contributed to the decline of bullion rates. Other items on today's agenda include: ADP estimate of U.S. non-farm payroll, U.S. ISM Non-Manufacturing PMI and Australian Retail Sales.

U.S. ISM Non-Manufacturing PMI: This report will refer to September. During August 2012 this index rose to 53.7% - this means the non-manufacturing is expanding and at a slightly faster rate than in the previous month; this index may affect forex and commodities trading;

The Euro/ USD rose on Tuesday by 0.23% to 1.292. Alternatively, some other currencies including AUD depreciated yesterday against the USD by 0.93%. The decision of the RBA to cut the cash rate pulled down the Aussie dollar yesterday. The correlation between gold and Euro and other "risk currencies" remains mid-strong and positive: during September/October, the linear correlation between the gold and EURO/USD was 0.63 (daily percent changes). The list of correlation among several leading currencies pairs and bullion rates is indicated below. The shift in the Aussie dollar and Canadian dollar may have contributed to the decline of gold. If these currencies and the Euro will continue to trade down against the USD, then they are likely to pull up gold and silver.

The decision of the RBA to cut the rate may continue having adverse effects on the bullion market via the decline in the AUD. The ongoing speculation around Spain's next move could affect not only the Euro, but also bullion. Today's publication of the U.S ISM non-manufacturing PMI could affect the USD, stocks and commodities if the report will keep showing faster growth in the non-manufacturing sectors in the U.S. Finally, if the Euro and AUD will trade down, then they could also pull down the prices of precious metals.