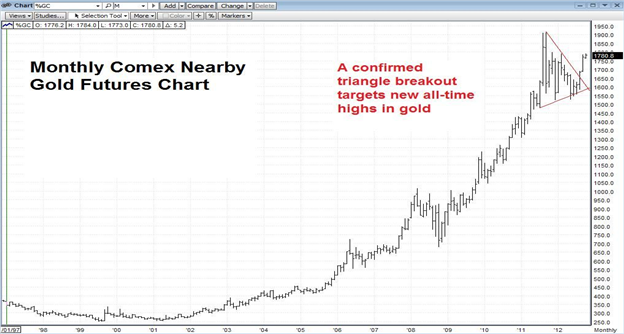 Gold and the U.S. dollar index are reacting to the same fundamental drivers, which include concerns over monetary accommodation and currency debasement, worries on the U.S. fiscal and long-term debt outlook, and the sluggish U.S. economic growth and labor market outlook.

But, gold has been more aggressively reacting to and pricing in the latest news on the upside. There's been a euphoric move higher as gold broke out of its doldrums spring and summer months trading range.

Looking ahead, there are many boulders in the path for the U.S. dollar from a fundamental perspective. Following its dual mandate to pursue full employment and low inflation, the U.S. Federal Reserve has already committed to $40 billion in mortgage backed securities purchases per month for as long as it takes. The Fed has played their all of their cards and now it’s the politicians in Washington's turn.

At the moment, the politicians have left the U.S. economy literally hanging at the edge of the so-called and widely talked about "fiscal cliff," which ushers in mandatory tax increases and spending cuts starting January 1, 2013. Many economists estimate if the full impact of the fiscal cliff is allowed to go into effect, it virtually guarantees a dip back to recessionary growth levels in the U.S. next year.

This Friday's employment report will be fodder for the on-going political bickering and rhetoric. A weaker than expected number will be more ammunition for Republican candidate Mitt Romney in the barrage of campaigning which has descended upon a few critical swing states. For the markets? Weaker-than-expected numbers will be dollar bearish and gold bullish. However, ahead of the November U.S. presidential elections we aren't likely to see any new initiatives from the Fed, and the country is unlikely to see any action on the fiscal cliff until the lame duck session after the election.

The next several months will be a rocky road for the U.S. dollar, with a myriad of boulders strewn in the path of any bullish rally attempts. On-going worries about the fiscal cliff and threats of another debt downgrade if a lack of progress is seen on long-term debt reduction continue to loom like black clouds on the horizon for the U.S. dollar. These are the fundamental factors that gold bulls thrive upon.

Gold like many other global commodities is, of course, priced in U.S. dollars (though some nations would like to see gold and oil trade with a different denominator, but that is a different story for a different day).

A look at the monthly chart for Comex nearby gold futures reveals a confirmed upside breakout on a triangle pattern for gold. Inchart pattern analysis, triangle formations are continuation patterns. Basically, the yellow metal spent just over a year consolidating, a pause in the decade-long bull trend for gold. While different traders utilize different measuring techniques for triangles, one estimate projects gains to roughly $2,100 per ounce—new all-time highs.

That bullish technical pattern for gold is in play. Bottom line? Gold bulls are chomping at the bit looking for any excuse to unleash a run to new all-time highs in the yellow metal. This fall could provide plenty of fundamental fodder for such a run.

On the flip side of that equation, bullish gold factors generally tend to be bearish dollar factors. And, recent gold gains have nearly doubled the pace of the dollar's declines, with the U.S. dollar index tumbling over 4% from August 21-September 14, while Comex December gold futures rallied over 9 % during that time period.

Do gold bulls know something dollar traders should be thinking about? If concerns over Europe and the safe-haven flows dissipate further, one of the few bullish props in the dollar's toolkit would disappear. Maybe at some point soon, dollar declines will play catch up to the pace of gold's gains.