Guest Commentary: Is Standard and Poor’s a rating or a rumor agency?

As many readers of our blog know, we are not the best of friends with the current Swiss National Bank (SNB) policy: we recently published a paper claiming that the SNB will go bankrupt and be bailed out by the tax payer. Our main reason was that in the next seven to ten years, inflation-adjusted foreign returns will be smaller than real returns in Switzerland. Excessive debt and the money printing policies of major central banks will trigger another run into the franc, and one day, the SNB will be overwhelmed by inflation.

But what Standard and Poor's published last week on the SNB, and for which it wanted news agencies to pay at least 400 US$, was not even worth a penny. We wonder why a rating agency, an institution on which so many investors rely, is allowed to publish completely wrong numbers based on a very superficial analysis?

“Largely unnoticed, Switzerland’s decision to stem the appreciation of the Swiss franc has led to a de facto recycling of funds from the eurozone periphery to its core, via the Swiss National Bank (SNB).

While the SNB does not detail its foreign exchange holdings by issuer, we estimate that it has bought around €80 billion of bonds issued by the core sovereigns during the first seven months of 2012 alone.

The SNB’s eurozone bond buying during the seven months of 2012 is equivalent to about 48% of the combined full-year deficits we estimate for the eurozone core for the whole of 2012, up from 9% in 2011. In our view, this has significantly contributed to the declining yields on bonds issued by the core sovereigns during 2012.”

The SNB’s answer was the following:

“The Swiss National Bank Tuesday said a report by rating agency Standard & Poor's on its holdings of euro-denominated government bonds contained a fundamental error. The report "ignores the sizable increase of SNB deposits with other central banks and international institutions which are published monthly by the SNB," the Swiss central bank said in a statement. "The conclusion by S&P that the Swiss National Bank has bought about 80 billion euros of government bonds of core euro zone countries is unfounded." (source)

“We stand by the conclusions of our report. Irrespective of the rise in SNB deposits with other central banks (which has risen by significantly less this year than bonds held by the SNB), our analysis and the SNB’s own data suggest a very substantial increase in SNB purchases of core Eurozone government debt in recent months. The SNB does not disclose the make-up of its bond holdings, but we believe the assumptions underpinning our analysis are reasonable.” (source FT Seeking Alpha)

We did the calculations and obtained the following:

Our result was 49.7 billion € in new European government bond purchases, a number far smaller than the 80 bln. € S&P claimed to see, but still higher than other sources.

“Taking deposits at other central banks out of the reserve figure we got a new total of near €40bn while Credit Suisse estimated €30–35bn.

Either way, we are talking far less than the S&P’s €60bn-€80bn but not insignificant at all.”(source FT Seeking Alpha)

We ask ourselves if Standard and Poor's is a rating or a rumor agency?

What would happen if they estimated the German debt/GDP ratio at 140% instead of 90%, with a similar "insignificant" difference to the reality and downgraded Germany to junk?

Standard and Poors' made a lot of other mistakes:

1. Maybe S&P does not know it, but the SNB discloses some details about the purchased bonds. It publishes ratings and duration once a quarter (latest data is here).

2. The rating agency compared the 10 year French government bond with Swiss currency reserves (see right side). It might be true that the Swiss started to buy French bonds, but the duration of the newly purchased bonds was around 0.87 years (calculation in our detail report). Consequently total duration (including 70% of existing positions by the end of 2011) fell from 4.0 years in Q1 to 2.8 in Q2 (same source). Hence the SNB hardly bought any 10 year bonds in 2012, but only short-term notes, probably of core euro states with positive yields and not of Germany that saw negative yields. 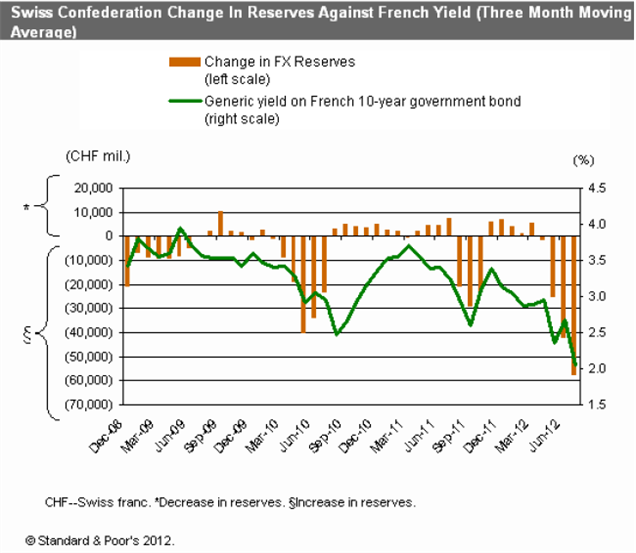 3. S&P ignored the price change of existing SNB holdings as of the end of December 2011. We estimate that the SNB had gains of 5 billion CHF just because of bond price changes.

4. The SNB bought bonds with small durations of 0.87 years or simply currency at other central banks. Price changes of the core European government notes with these durations were very small during 2012. The yield of the French 1-year BTAN changed from 0.24% at the end of 2011 to 0.02% at the end of July. Therefore a big price influence by the SNB can be excluded. 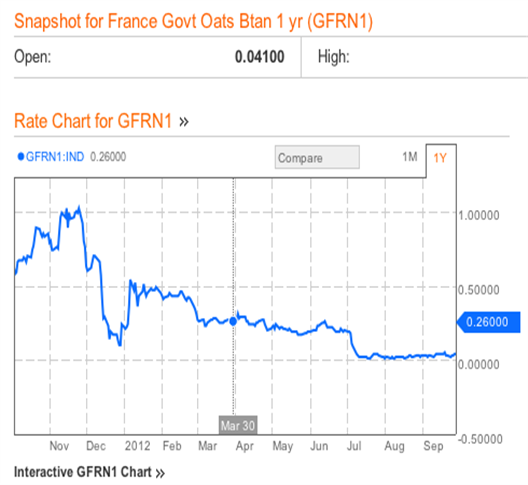 5. Even the big rise in 1 yr. BTAN yields in January can not be justified by SNB purchases, because they sold securities with a value of only 3 bln. CH in January.

6. Given that yields of these core European short-term bonds remained stable during the big SNB interventions between the middle of May and end June indicates that the SNB might have back-stopped a fall in prices

7. In the first week after the euro summit on June 29th, French 1yr. BTAN yields fell strongly, but the SNB reduced their weekly interventions from the recent amounts of 18 and 10 bln. in June to 6 bln. CHF in the first week of July. The correlation between SNB purchases and French short-term yields seems to be low.

8. The unchanged "A rating" share of 4% between Q1 and Q2 shows that the central bank bought Italian government bonds with a value of at least 2 billion francs. Apart of Italy there are only the small Slovenia and Slovakia that have an A rating.

9. "Other ratings" (below A) dropped from 2% to 1% in Q2. Therefore, we reckon that the SNB bought hardly any Spanish bonds during Q2.

10. If the SNB deposits euro cash at the ECB, then this money can be used for ECB refinancing operations and benefits the periphery. Moreover, these SNB funds to the ECB are sterilized.

11. The SNB reversed its policy in July 2012. It increased cash until the end of June, but in July it reduced cash and bought government bonds. We think that some "insider information" from the ECB and the Fed let them know that OMT and QE3 were imminent. Buying notes of core European states at record-low yields and record-high prices was probably not very useful given that a certain inflation risk with QE3 was indicated. Until the present, the central bank would have suffered substantial losses because prices have fallen since July. Therefore, we judge that they increased the share of "A ratings" (i.e. Italian bonds) from 4% to maybe 6% or 7% and other ratings (Spanish bonds) from 1% to 2%, buying these peripheral bonds at record-low prices. The SNB will publish more detailed data about the SNB holdings in July and the whole third quarter on October 31st. Then our suspicion can be checked. Only point 11 is a rumor, but at least it has strong reasoning. 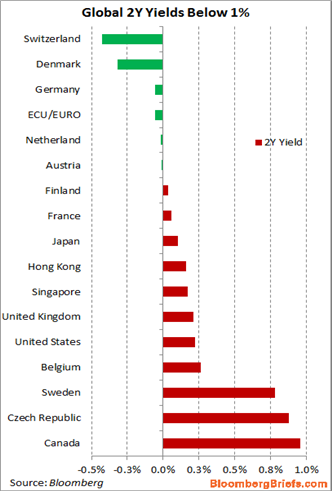 A remark on the Swiss ability to defend themselves

As usual, the Swiss papers and blogs managed to give only a very general rebuttal, namely that Standard and Poor's and others mixed up the reason (the euro crisis) and consequence (the SNB buys core European bonds). See the blog of the Swiss Banker's Association and Never Mind the Markets, the blog of the Tagesanzeiger.

Their response is only in German, as usual, to keep the Swiss public quiet, but not to defend the Swiss National Bank against global public opinion. We are sure that with time, the opinion of the global finance world will also be influenced by the International Monetary Fund (IMF). Then the IMF will suggest that the franc is not overvalued anymore and they will oblige the SNB to let the exchange rate fluctuate again.

Like in the recent tax affairs, the Swiss will obey the American wish and international opinion, and remove the floor.