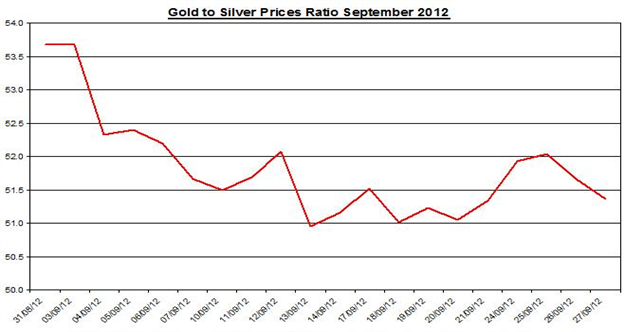 Following the decline of precious metals during most of the week, they have changed direction as both gold and silver pulled up on Thursday along with the rest of the market including oil prices, the Euro and major stock markets. This rally came despite the lower than anticipated growth in GDP for the U.S during the second quarter 2012. The recent news from Spain that the country is ready to pass new austerity plans may have contributed to the rally of the Euro. U.S jobless claims declined by 26k; this news may have also helped rally the commodities and stock markets. On today's agenda: German Retail Sales, KOF Economic Barometer, Canada's GDP by Industry and UoM Consumer Sentiment.

The ratio between gold and silver declined on Thursday to 51.36. During September, the ratio declined by 4.31% as gold slightly under-performed silver.

German Retail Sales: In August, retail sales declined by 0.9%; if this report will remain negative then it might weaken the Euro;

Canada's GDP by Industry: the report will refer to the shifts in major industrial sectors for July 2012. In the previous report regarding June 2012, the real gross domestic product edged up by 0.2%. This report may affect the strength of the Canadian dollar currency which is strongly correlated with commodities;

UoM Consumer Sentiment (revised): University of Michigan will issue its revised consumer sentiment survey; this survey could offer another insight to recent developments in U.S consumers sentiment about the economy; last time the sentiment index increased to 74.3;

The recent positive news from Spain about the budget cuts may have helped curb the fall of the Euro and thus also pulled up commodities prices. The recent positive news of the U.S jobless claims may have also helped not only stock markets but also commodities markets. On the other hand, the U.S GDP may have raised the expectations that QE3 will continue for a long time and the Fed might even introduce additional plans in the near future. China's manufacturing PMI could affect commodities prices: if the report will continue to fall and will be below the 50 mark it could adversely affect commodities rates unless of course this will raise the speculations that China will initiate additional stimulus. Finally, I still think that gold and silver will remain at the currently high level and even continue their rally.

For further reading: QE3 Is Here, So Why Gold isn’t Pulling Up?