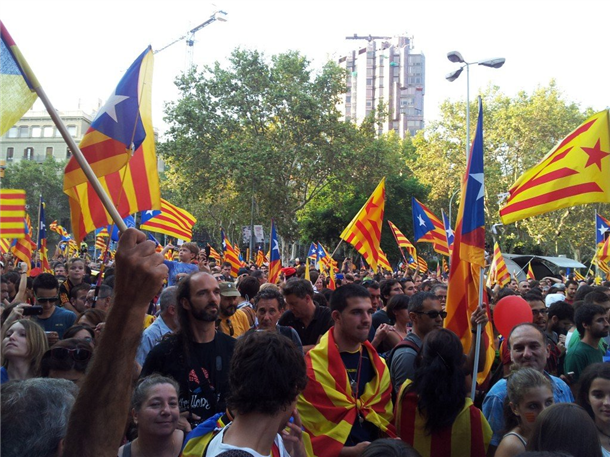 Guest Commentary: Catalonia at Crossroads After Rajoy’s Clear “No” to Any Compromise

Spanish PM Mariano Rajoy met Catalan President Artur Mas in a tense meeting. The Catalan request for a new fiscal pact was rejected by Rajoy. The same Prime Minister that is taking his time with an aid request from the EU wasn’t patient with Catalonia.

Mas said that the Catalan parliament will debate the next steps next week. Catalonia could go to elections as early as November, in a vote that could serve as a de-facto referendum on Catalan independence. These ongoing tensions may weigh on the euro.

Catalans currently pays their taxes to the central government in Madrid, which in turn redistributes the money. As a rich region, Catalonia receives far less money than it pays. Many Catalans want to change the terms, so that Catalonia will collect taxes and then pay Madrid for the services it gets. These are the terms for the Basque Country and Navarre. The demand has grown after Catalonia found itself asking for aid from the central government, after being shut out of money markets.

Rajoy told Mas that there is “no margin” for any change in the current deal, especially in the current crisis. He said that the request isn’t compatible with the Spanish constitution.

Why not take the time?

The result of this meeting was expected by all sides, but it could have been different. Rajoy and his government are taking their time with “studying” the conditions for the ECB’s bond buying plan since the beginning of August. Spain doesn’t want to undertake more austerity measures dictated from outside, like Greece, Ireland and Portugal.

In the meantime, market sentiment has improved and Spain managed to raise money in the markets in more favorable terms, without committing to a bailout. While it is clear that this cannot last forever, Spain has more room for negotiations and more time to prepare the public for a turnaround in policy.

It is therefore somewhat peculiar that Rajoy sent a clear negative answer to Catalonia, instead of opening the door for negotiations. By doing so, the Catalan demand for independence would ease, while the central government could continue with the current model – saying no only at a later date, or making some kind of compromise when the economic situation improves.

In Catalonia’s national day, September 11th, a huge number of people flooded the streets of Barcelona in a call for independence. Estimates ranged between 500 thousand to 2 million participants. In any case, the rally was huge for a region of 7.5 million people. For the first time, a majority of citizens sees a future outside the Kingdom of Spain.

With the clear No, Rajoy just fueled Catalan separatism, proving to them that Spain doesn’t care at all about Catalonia’s feelings and economic requests.

The parliament of Catalonia is expected to debate the situation during the last week of September, and could call for new regional elections – elections in which a path for independence will be clearly voiced by the parties.

So far, the ruling center right CiU party has been rather ambiguous in its stance regarding independence. It may now seek a clear mandate for secession.

Another event worth following is the upcoming football match between FC Barcelona and Real Madrid. The matches between two of the best teams in the world always serves as a stage for venting nationalistic feelings. The upcoming match on October 7th will probably be even more politically charged than previous encounters.

Spain and the euro

Spain has a wide range of economic issues: the highest unemployment rate in the developed world, a record in bad loans, a troubled banking sector and many regions (not just Catalonia) in dire straits. Adding more tension in the Catalan front may impact Spain in the financial markets and hit the euro.

Spain may be forced to take a bailout in worse conditions and not in the best timing. Hope for Spain helped the euro recover, and Spanish trouble will weigh heavily on the common currency.

For more, see the EUR/USD forecast.