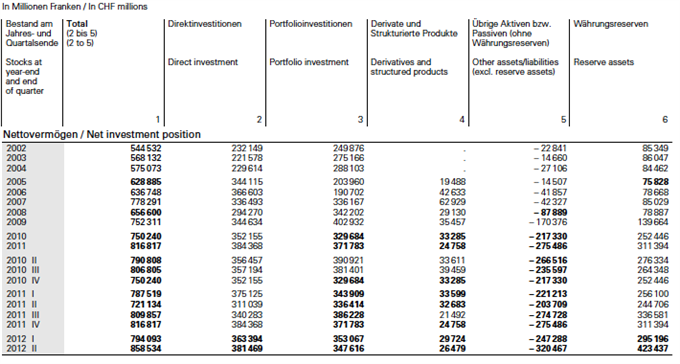 Last Thursday Thomas Moser, a member of the Swiss National Bank (SNB) governing council, said that one of the main reasons for the strong franc is the conversion of Swiss foreign incomes into francs.

One day later the SNB monthly bulletin is published. It reveals a huge increase of the Swiss Net International Investment Position (NIIP) by 65 billion francs in the second quarter, a whopping 9% of Swiss GDP. We reported here or on Daily FX. Between May and July the SNB currency reserves rose by more than 50 billion francs per month, to which these foreign incomes contributed largely.

Switzerland improved its net foreign position by 43 billion francs per year since 2005, 7% of GDP. If we exclude the Great Recession then this number is even 10% per year.

When the global crisis started, the Swiss simply converted their foreign currency (albeit weaker) profits into the rising Swiss franc and were therefore largely immune against the decline (more details in our paper on Seeking Alphaon September 18).

Since the onset of the global financial crisis, the dynamics of Switzerland's balance of payments have fundamentally changed. Instead of investing its large current account surpluses abroad via purchases of overseas assets, as it did habitually before the crisis, the Swiss private sector has been accumulating savings at home. (source S&P)

S&P's is actually only partially correct. When they speak of "habitually before the crisis", this concerns only the period between 1997 and 2007, when thanks to the upcoming euro, yields and risks in Europe decreased significantly.

During the carry trade era until 2007, or the "great moderation" like Ben Bernanke misleadingly named the period of excessive expansion of private and public debt, the franc fell strongly. Many used the CHF as the financing currency in carry trades. Austrians and Eastern Europeans signed mortgages in francs, thus weakening the Swiss currency even further. Swiss companies kept on holding their profits in foreign currencies. 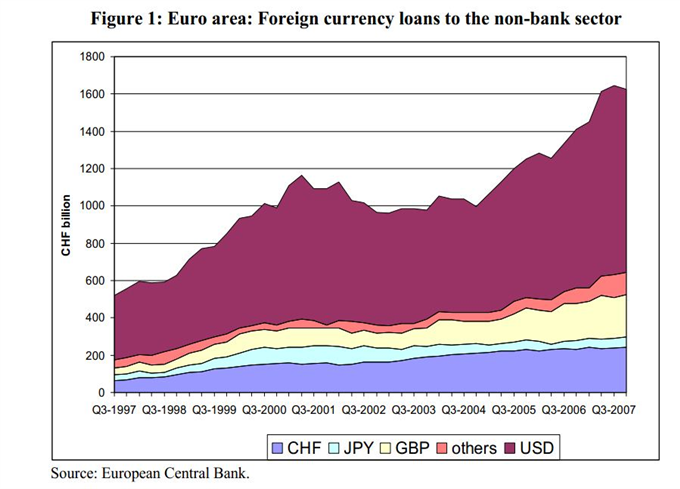 After the SNB printed money with the 1987 Black Friday recession and the Swiss government declared private pension funds to be obligatory, a period started when Swiss pension funds and private investors rushed into Swiss real estate. As a result the franc became strongly overvalued in 1995.

These developments were then followed by a housing bust and deep recession for the Swiss economy: a basis for the upcoming carry trade. 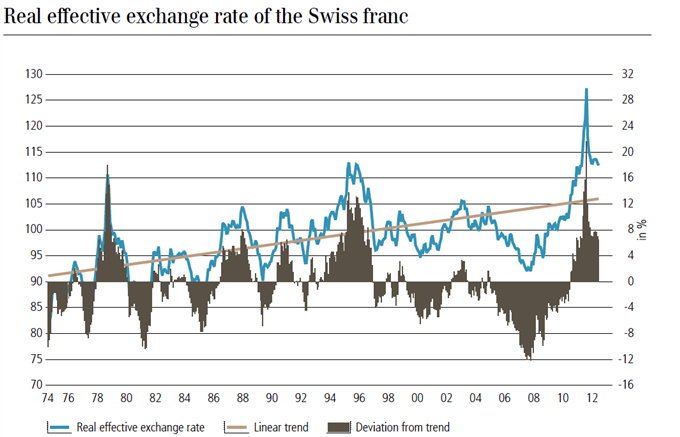 During the "great moderation" the Swiss managed to achieve strong profits in the emerging markets (see red line in the graph below) and kept them in foreign currency. At the same time the Swiss balance of payments was negative despite these current account surpluses, money flew out of of the country. In Switzerland many were asking why growth was so limited at home (see the 2005 "The Swiss economy is expanding more strongly than it seems" by former SNB chief economist Georg Rich), not realizing that growth in the euro zone (e.g. in the PIIGS) was not sustainable and often just credit-financed with excessively cheap SNB money. 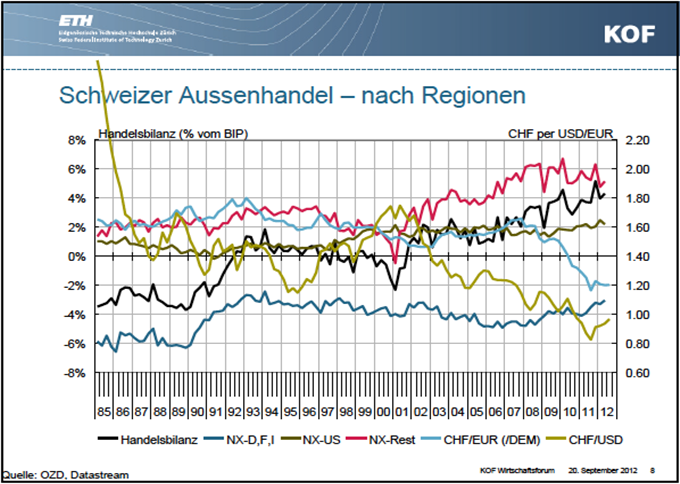 After 2008 everything changed, money returned to Switzerland at accelerating speed. The SNB stopped these inflows with the EUR/CHF floor and exporters recovered. The latest rise of the NIIP contributed to a 1.8% Q2 appreciation of the Swiss Gross National Income (GNI). 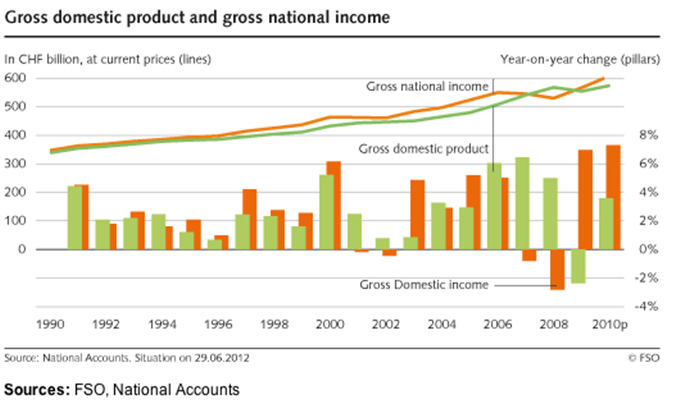 The continuation of the above graph looks as follows (source SECO and Yahoo finance):

It becomes obvious that the SNB introduced the floor exactly when Swiss foreign incomes were subject to a strong fall (Q3: -3.3%). At yesterday's hedge fund conference in Pfäffikon I asked Mr. Jordan if the SNB's aim was to stop a fall in Swiss foreign incomes. Jordan negated this and replied that his only objective was to save Switzerland from deflation.

The Q2/2012 NIIP data shows that the SNB already managed to safeguard foreign incomes of Swiss companies. Inflation is still to come. According to Jordan deflation should cease at the end of this year.

According to our research, the CPI moves upwards quite slowly. The reasons are the European recession and the fact that importers' contracts are mostly long-term or based on company internal transfer prices (source: phone call with Swiss Statistics, department Producer Price Index). Therefore import prices go up more slowly than we and the SNB expected.

Jordan's answer to my second question: "What comes first: the end of the euro zone crisis or Swiss inflation?", was a nice laughter and that inflation will be rising very slowly.