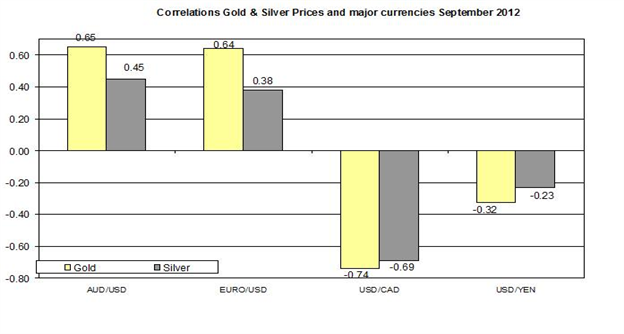 The prices gold and silver declined on the first day of the week along with other commodities and forex rates such as Euro and AUD. The Euro market is still waiting for Spain to request the ECB to commence its bond purchase program. The announcement of the FOMC to launch QE3 seems to have dissipated. Did yesterday's falls were a bit sharp that could result in a correction? On today's agenda: German Consumer Climate, ECB President Speech, Canada's Retails Sales and U.S Consumer Confidence.

U.S Consumer Confidence: according to the recent monthly update, the consumer confidence index fell in August (M-o-M). The current expectations are that the September index may rise; this report might affect commodities markets;

Canada's Retails Sales: This report will show the shifts in the retails sales in Canada during July 2012. It may affect the direction of USD/CAD currency pair, which is strongly linked with commodities rates. In the previous report regarding June, retails sales declined by 0.4%;

ECB President Talks: Mario Draghi will talk in an annual event "Day of the German Industries". In his speech he might refer to the future monetary steps the ECB will take. This speech might affect the Euro to USD;

The Euro/ USD declined on Monday by 0.39% to 1.2931. Further, other currencies including AUD also depreciated yesterday against the USD by 0.3%. As indicated in the chart below, there are still strong linear correlations among Euro, AUD, CAD and precious metals rates: during August/September, the linear correlation between the gold and EURO/USD reached 0.64 (daily percent changes). Following the recent shift in the market sentiment, if the bearish market sentiment towards the Euro and other risk currencies will continue, it is likely to further drag down gold and silver.

The bearish market sentiment in the Euro Area might continue to affect not only the Euro/USD but also commodities rates. Today's publications including Canada's retail sales, German consumer climate and U.S consumer confidence could affect the Canadian dollar, Euro and US dollar, respectively as indicated above. China's money rate hiked to a 7-month high plausibility due to a shortage in cash. Finally, if the Euro will continue to fall, this could pull down bullion rates.

For further reading: Gold And Silver | Outlook for September 24-28