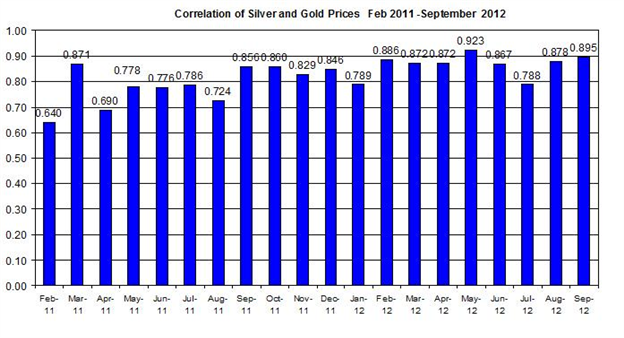 The prices gold and silver remained nearly unchanged for the fifth consecutive business day after they had increased precipitately during the first couple of weeks of September. The depreciation of the Euro along with other "risk currencies" may have curbed the rally of precious metals. The Philly Fed index slightly rose in September to reach -1.9 which is still negative. The U.S jobless claims remained high as they had decreased by only 3k to 382k for last week. These news items may have contributed to the modest fall in commodities prices. On today's agenda: Great Britain Net borrowing, Canada's Core CPI, and FOMC member Lockhart's Speech.

Despite the different directions gold and silver took in the past couple of days, the linear correlation of the two precious metal daily percent changes is still strong and positive, as indicated in the chart below. During September the linear correlation of their daily percent changes reached the highest level since May, which means the two metals' relation has tighten in recent months.

Great Britain Net borrowing: this report will refer to the monthly changes in the public sector net borrowing for August; as of July, the net borrowing reached £0.6 billion;

Canada's Core CPI: This report will pertain to the core consumer price index for August 2012 and controlling the volatile components such as energy, fruit and vegetables. According to the Canadian CPI report for July 2012, the CPI rose by 1.3% during the past 12 month up to July – this is a slightly lower rate than in June. This report might affect the Canadian dollar, which is also strongly correlated with precious metals prices;

FOMC member Lockhart's Speech: He is expected to speak about the Fed's monetary policy and his projection for the U.S economy.

The rates of precious metals remained nearly unchanged during the week and despite the launch of QE3 last week, bullion rates are likely to finish the week with little change. The speech of FOMC member today could offer some insight behind the Fed's monetary policy and his take on the recent stimulus. Today's publications regarding Great Britain Net borrowing and Canada's Core CPI could affect their respective currency if the reports will show a sharp and unexpected change. The speculations around the future move of People Bank of China to stimulus the Chinese economy could keep affecting not only the forex but also commodities markets.