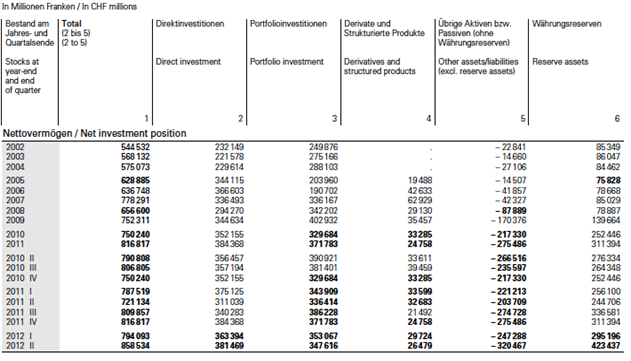 According to the latest SNB Monthly Bulletin, the Swiss net international investment position (NIIP) has improved by 64.5 billion francs. The Gross National Income (GNI) rises by 1.8% in Q2.

The SNB currency reserves rose by 128 Bln. Francs in the last quarter, which were partially, offset by the increase of SNB liabilities by 95 Bln. CHF and the closing of 25 Bln. Repurchase Agreement (REPO) positions. Both the repo closing and the SNB liabilities indirectly reduce the value in the "Other assets/liabilities" column to a record low of -320'467.

The SNB contributed with its 6.5 Bln. half-year profit to the 64.5 billion CHF NIIP improvement.

Especially the better values of direct investments and the limitation of other liabilities, far lower than the SNB balance sheet indicates, helped to achieve the strong NIIP improvement.

In the table below we can observe that banks increased their debt to foreign creditors by 47 Bln. CHF, of which 23 Bln to banks and 24 Bln. to private clients. The money, the banks borrowed from foreigners, was then lend to the SNB. The central bank increased its direct debt to foreigners by only 6 Bln. CHF, because its operations were mostly unsterilized, i.e. via deposits obtained from local bank and not via SNB bills. 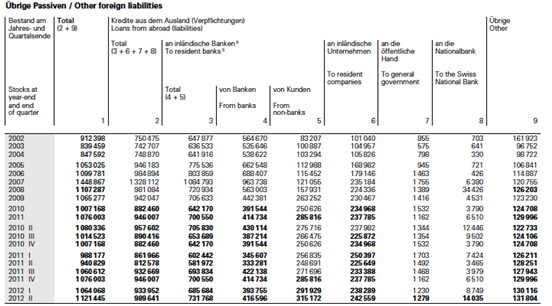 The change in the international investment position is reflected in the strong increase of 1.8% of the Swiss Gross National Income (GNI) in Q2/2012, much stronger than the 0.5% appreciation in Q1/2012 (source SECO).

Financial markets and Forex traders usually judge that the Gross Domestic Product (GDP) is more important. Swiss GDP contracted by 0.1% in Q2/2012 after a rise of 0.5% in the first quarter.

During risk-off periods, however, the net international investment position and the GNI become far more important, because foreign assets represent a collateral for creditors (more details here). Moreover, foreign profits are repatriated into local currency, which then pushes the franc higher.

SNB's Thomas Moser gave yesterday a detailed explanation, why this profit repatriation was one of the main reasons for the strong franc and the capital inflows (details NZZ) and probably also for the strong inflows in Q2.