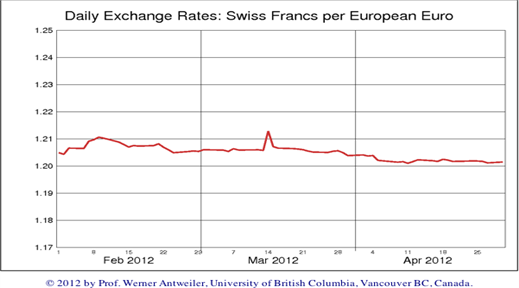 Guest Commentary: Isn’t Wonderful to Trade With a Strong Central Bank Behind You?

Isn’t it wonderful to have a strong central bank like the SNB sitting behind you when trading Forex?

Losses are limited to the floor of 1.20 and in the meantime one can gain forward swaps with the higher euro zone interest rates.

Today the Swiss National Bank (SNB) decided in its monetary policy assessment meeting to maintain the floor at 1.20 despite rumors on a floor hike. Moreover they lowered the Swiss growth and inflation expectations.

Like in the March meeting, the Forex crowds got excited about the central bank’s commitment and pushed the EUR/CHF higher.

Surprisingly the exchange rate did not fall directly after the meeting. Given that the Swiss economy might weaken and that the ECB seems to have solved the euro zone crisis with her “pay-all-with-German-tax-payers-money” Bazooka, Forex traders currently have big faith in the two central banks. The common euphoria lasted even after the SNB monetary policy assessment meeting.

As we stated already in a previous post, if the SNB does start not big CHF purchases, the EUR/CHF can remain several weeks above the floor level of 1.2010. Between November 2011 and April 2012, the SNB bought francs and slowly moved the exchange rate from 1.22 towards 1.20, often only 1 or 2 pips per day. Once this was similarly based on rumors about a floor hike, namely at the March SNB meeting. Some Forex traders even thought that “there were some big accounts trading against the central bank”, but they finally realized that they themselves were trading against the central bank.

Chart: SNB is selling euros and moving EUR/CHF slowly to 1.20

We think that the same thing will happen now. Forex traders are by 95% long EUR/CHF and they will not move out of the pair until it reaches a certain stop loss. For many the stop loss is defined around 1.1995, slightly below the floor of 1.20. Yes, there might a 1% loss between the current levels of 1.2125 and the floor, but the 0.75% yearly swap difference can nearly make this up, at least if their Forex platform does not charge too much. And there is still the chance that the SNB raises the peg….

We might have entered a phase during which the SNB is able to sell some of her reserves to these FX traders. Due to seasonal factors these selling phases often last from September/October to March. Between April and September, the central bank had to increase reserves and/or accepted a defeat. However, due to the relatively high USD/CHF rate and rising QE3 hopes, we are not sure that the SNB will be able to reduce reserves between September 2012 and March 2013.

Last week’s SNB monetary data shows that the central bank had to buy foreign currencies for the equivalent of five billion newly “printed” francs despite the EUR/CHF rise, these purchases were higher than the numbers in August.

One group of investors does not really care about forward swaps in the currency markets. Global macro funds and traders of (especially) US investment banks anticipate the movements of long-term investors (more details here).

They will come into the office soon and will trade the FOMC meeting. These funds and traders look on global macro data, like inflation or a potential quantitative easing, which will drive long-term investors out of the USD into gold and the correlated Swissie.

Last but not least, there are certain investment products that make investment banks lose money against their wealthy clients when the EUR/CHF appreciates too much. A highly used example is the so-called “DOCU” on EUR/CHF with the common strike level of 1.22: 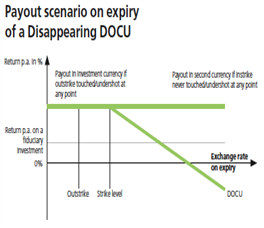 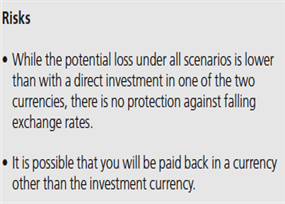 Is the SNB soon a seller of euros and buyer of USD?

Given the small difference between ECB and Fed rates, we reckon that the EUR/USD will not move far over 1.30, even with QE3. EUR/USD of 1.30 or more would be justified only with an ECB key rate of 1% but not with 0.75%.

Therefore we think that the SNB will soon switch to selling euros to buying USD and GBP. In the second quarter they increased the euro share to 60% and invested 77% of new reserves into euros buying euros at levels of EUR/USD of 1.22.

Kit Juckes at SocGen is also of our opinion:

If I were the SNB, I would heave an absolutely huge sigh of relief and set about the task of diversifying my reserves away from the euro (euro share at 60% or so is 10% higher than they want). I would not mess with the level of the peg. Though I might be tempted to slip a few thoughts about eventual adjustment out, because if the market talks about it and weakens my currency for me, that makes my life easier and the CHF value of my reserve portfolio goes up….

How to trade it?

Trade with the SNB traders, investment banks and rich investors, buy francs and sell the euro. It is perfectly possible that the SNB Forex reserves rise this week, but the common euphoria of FX traders pushes the EUR/CHF upwards. Over the mid-term the SNB will try to sell her huge euro reserves and the EUR/CHF will move downwards again. The question is just to find the right entry point to be short EUR/CHF. An entry point could be last week Friday’s high of 1.2154 or the DOCU strike of 1.22. Anything below these entry points is probably not worth trading, gains might not be sufficiently high.