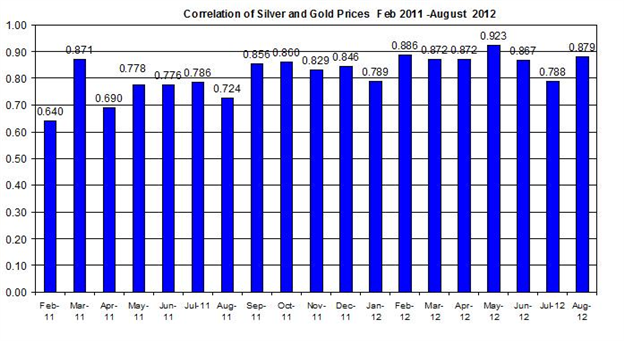 Gold and silver traded up in recent weeks (see chart below). As I have pointed out in the weekly gold and silver outlook, there are speculations that quantitative easing 3 will be announced soon by the FOMC. Bernanke's speech didn't suggest, in my humble opinion, that QE3 will be implemented soon. There are also speculations around the future bond purchase program of ECB: in a closed testimony in the European Parliament ECB President, Mario Draghi, supposedly laid out his plan for his bond purchase program. If the ECB will announce of this program in the near future (there is a rate decision on Thursday) this could affect the Euro, which is positively correlated with bullion rates. On today's agenda: Reserve Bank of Australia – Cash Rate Statement, U.S. ISM Manufacturing PMI, and Australian GDP Second Quarter 2012.

U.S. ISM Manufacturing PMI: During July 2012 the index edged up to 49.8%, which means the manufacturing is still contracting; this index may affect forex, and bullion;

Australian GDP Q2 2012: In Q1 2012, the GDP expanded by 1.3% (seasonally adjusted). The slowdown in China's growth might also adversely affect the growth of Australia's GDP; if the growth rate will dwindle it could affect the AUD;

Precious metals traded up in recent weeks and they may continue this upward trend during this week. The renewed speculations around the future steps of the Fed vis-à-vis another quantitative easing plan rekindled the precious metals market. The recent speech of Mario Draghi also raised the speculations of bond purchase program that will help struggling countries such as Spain and Italy. Today's publication of the Australian GDP, U.S Manufacturing PMI might have a modest effect on the Aussie dollar and USD, respectively. In such a case, these currencies could also affect the rates of gold and silver. If RBA will change its interest rate it could also affect the Aussie dollar which is strongly linked with bullion. Finally, if the Euro and other "risk currencies" will rise during the day they could contribute to the rally of precious metals.