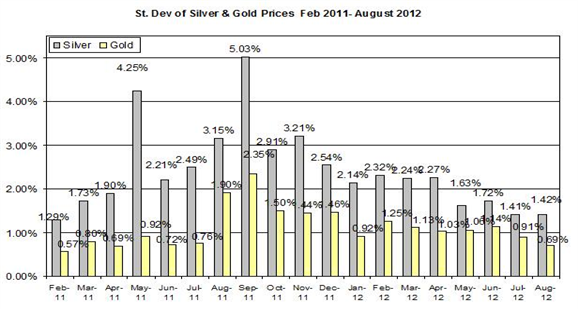 Today, the symposium at Jackson Hole will conclude with the highlight will be around Bernanke's speech as many bullion traders await to see if the Chairman of the Fed will hint of the future steps of the FOMC, i.e. will the Fed issue another quantitative easing plan. On today's agenda: U.S Factory Orders, Euro Area unemployment rate, Euro Area Inflation, Canada's GDP and German Retail Sales.

The little movement of both precious metals rates in recent months is represented in the drop in precious metals prices' volatility during the past couple of months: during August, the standard deviations of precious metals (daily percent changes) reached 0.69% and 1.42%, respectively.

Bernanke's Speech: Following the publication of the minutes of the FOMC meeting and the renewed expectations for another FOMC QE program, many bullion traders await Bernanke's speech that could hint of the FOMC's future steps. The Chairman of the Federal Reserve will give a speech today before the Federal Reserve Bank of Kansas City Economic Symposium, Jackson Hole, Wyoming. The title of his speech is "Monetary Policy since the Crisis";

The Euro/ USD declined again on Thursday by 0.2% to 1.2506. Further, other currencies including AUD and CAD also depreciated on Thursday against the USD. As seen in the chart below, the linear correlations among precious metals and Euro are still strong: during August, the correlation between the gold and EURO/USD reached 0.5 (daily percent changes). This means, if these currencies pairs will further deprecated against the USD, it could also adversely affect precious metals. 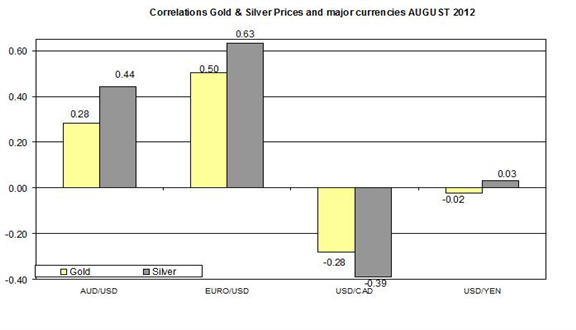 The U.S report regarding factory orders may affect not only the USD but also bullion rates. But metals traders will continue to wait for today's event – Bernanke's speech that might affect the bullion market. If Bernanke will hint of another QE program, it could have a strong effect on the rates of precious metals. Other reports pertaining Canada and EU, as indicated above, could affect their respective currencies, which, in turn could also affect commodities. Finally, the ongoing deprecation of the Euro and Australian dollar may have contributed to the fall of the rates of bullion. If these currencies will continue to decline, then they may drag down bullion.

For further reading: On the Relation between QE Programs and Gold