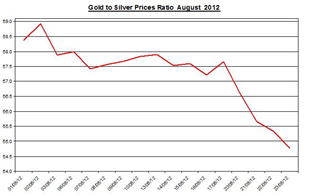 The prices of gold and silver, as expected, hiked during yesterday as a clear cut market reaction to the publication of the minutes of the FOMC meeting. The minutes revealed that many FOMC members consider “monetary accommodation would likely be warranted fairly soon”. In other news: The U.S new home sales report came out and showed a rise in sales. This news might have some lingering effect on today's bullion market. The U.S jobless claims rose by 4k to reach 372k. On today's agenda: GB revised GDP Q2 2012, and U.S Core Durable Goods.

The ratio between the two precious metals declined again on Thursday to 54.77. During August the ratio decreased by 5.31% as gold under-performed silver.

GB revised GDP Second Quarter 2012: This report will present the revised quarterly growth rate of the British economy during the second quarter of 2012; according to the preliminary estimate the second quarter contracted by 0.8% (yearly scale);

U.S Core Durable Goods: This report may indirectly present the changes in U.S. demand for commodities such as crude oil. As of June 2012, new orders of manufactured durable goods rose by $3.4 billion to $221.6 billion; if this report will continue to be positive then it could strengthen not only the USD but also bullion;

The Euro/ USD edged up again on Thursday by 0.28% to 1.2564. Alternatively, other currencies including Aussie dollar and Canadian dollar depreciated on Thursday against the USD by 0.62% and 0.25%, respectively. The linear correlation between gold and Euro, Aussie dollar are still strong and positive: during the month, the correlation between the gold and EURO/USD reached 0.49 (daily percent changes); between gold and AUD/USD, 0.316. Thus, if these currencies pairs will fall against the USD, it could also pressure down the prices of metals.

Precious metals hiked during yesterday, as an expected reaction, following the publication of the minutes of the FOMC meeting that rekindled the expectations from the Fed to issue another quantitative easing plan in the near future. I still think it’s not certain how this QE will help the U.S economy because it seems there is a diminishing return for QE programs. The news of the rise in new home sales sold may curb the rally of bullion rates while the rise in U.S jobless claims could have adversely affected the USD. Today's reports including GB GDP and U.S core durable goods could also play a role in today's precious metals markets (as specified above).

For further reading: Gold and Silver Outlook for August