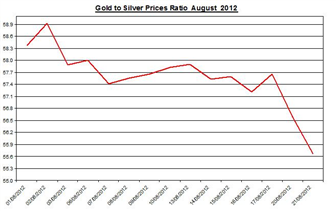 The prices of gold and silver, much like the Euro, hiked on Tuesday as many forex and bullion traders anticipate the ECB bond purchasing program will commence in the near future. There are also speculations on whether the People's Bank of China will stimulate the Chinese economy. Japan's trade balance report indicated a slowdown in Japan as the exports had declined by 8.1% during July. This news, however didn't seem to have much on an effect on the financial markets. Currently, gold and silver prices are declining. On today's agenda: Retails Sales Canada, Minutes of July's FOMC Meeting, U.S. Existing Home Sales and China flash Manufacturing PMI.

The ratio between the two precious metals declined on Tuesday to 55.67. During August the ratio fell by 3.76% as gold under-performed silver.

Minutes of FOMC Meeting: Following the recent FOMC meeting, in which it was decided to keep the monetary policy unchanged without introducing any additional stimulus plans, the bullion market reacted to this news. The minutes of the FOMC meeting might add some insight behind the latest "non-decision"; it could also offer some hints as to the future steps of the FOMC in anticipation of the next month's FOMC meeting;

The hike in the Euro was plausibility among the key factors pulling up gold and silver. Despite this renewed optimism the green light hasn't been turned on yet so this rally could reach a halt until an actual announcement will be made. Today's U.S reports including minutes of the FOMC meeting and U.S existing home sales report could affect not only the US dollar but also precious metals, as indicated above. The report on Canada's retail sales could also have a modest effect on the Canadian dollar which is strongly linked with bullion rates. China's manufacturing PMI report could also affect the market sentiment as to the progress of China's economy. If this report will continue to show contraction it could adversely affect commodities.