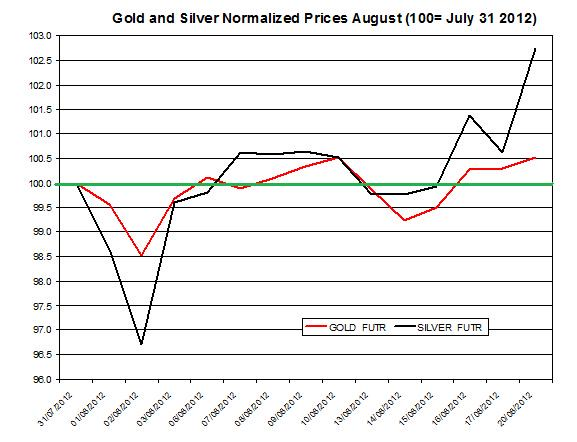 The prices of gold and silver bounced back and, unlike many other commodities, increased on Monday. Despite yesterday's rise, I still suspect bullion rates will trade down during the week. There are still talks around the future steps of ECB and Bank of China vis-à-vis their intentions to issue a stimulus plan. On today's agenda: Minutes Great Britain Net borrowing and the Japanese Trade balance.

As seen below, the chart presents the changes of normalized prices of precious metals in the last several weeks (normalized to 100 as of July 31st). During recent days, both precious metals had a moderate upward trend.

Great Britain Net borrowing: this report will present the monthly developments in the public sector net borrowing for July; as of June, the net borrowing declined to £12.1 billion;

Japanese Trade balance: The Japanese trade balance deficit for June fell by 51.4% compared to a deficit of 300 billion YEN (roughly $3.79 billion). This fall is due to the drop in imports by 6.5%, and despite the decline in exports by 1.4%. Japan is among the leading importing countries of commodities, including gold; its trade balance could provide some information about Japan's shifts in demand goods and services;

The Euro/ USD edged up on Monday by 0.09% to 1.2346. Further, other currencies including Aussie dollar also and CAD also appreciated against the USD. The linear correlation between gold and Euro, AUD are still robust and positive: during recent months, the correlation between the gold and EURO/USD was 0.48 (daily percent changes); between gold and AUD/USD, 0.51. Thus, if these exchange rate pairs will depreciate against the USD, it could also drag down the prices of precious metals.

I still suspect that precious metals will resume their moderate downward trend during the week especially if ECB won't announce of any stimulus plans in the near future. Tomorrow's FOMC might disappoint (again) bullion traders that will result in another fall precious metals rates. Today's publication of the Great Britain Net borrowing the Japanese Trade balance might affect each country's respective foreign exchange rate, which, in turn could also affect bullion rates Finally, if the Euro and other "risk currencies" will continue to depreciate against the USD, they could also contribute to the downward trend of precious metals.