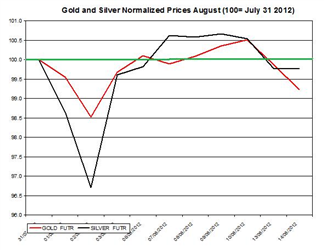 The prices of precious metals declined again for the second straight day. Will this weakness in the bullion market continue? The Euro Area GDP contracted during the second quarter of 2012 by 0.2%. This news may have contributed to the decline of not only the Euro but also bullion rates. On the other hand, the positive news from the U.S on the rise in retail sales may have helped rally major commodities prices. U.S PPI rose by 0.3% during last month, while core PPI increased by 0.4%. This news tends to be negatively related with the prices of precious metals. On today's agenda: the Minutes of the MPC Meeting, U.S Core CPI, and U.S. TIC Long Term Purchases.

As seen below, the chart presents the changes of normalized prices of precious metals in during the month (normalized to 100 as of July 31st). During August gold and silver remained nearly unchanged.

U.S. TIC Long Term Purchases: The Treasury InternationalCapital report will present the changes in the purchases and sales of US long term treasuries in June 2012. In the previous report regarding May 2012, the net foreign sales of U.S Treasuries longer-term notes reached $55 billion;

The Euro/ USD changed direction again and edged down on Tuesday by 0.09% to 1.2322. Further, other currencies including AUD also depreciated on Tuesday. The linear correlation between gold and Euro is still robust: during the past several weeks, the correlation between the gold and EURO/USD was 0.50 (daily percent changes). Therefore, if the Euro will trade down against the USD, it could also pull down precious metals.

Gold and silver prices continued to trade down and as long as there is no big surprise from the U.S or Europe the bullion market will remain at their respective range. The upcoming U.S reports including CPI and TIC Long Term Purchases could affect bullion prices as indicated above.

Finally, if the Euro and other "risk currencies" will continue to dwindle against the USD it could contribute to the decline of precious metals rates.