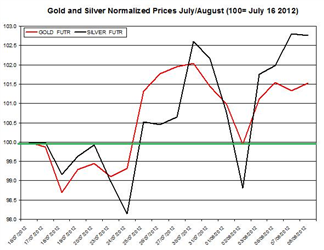 The prices of precious metals, much like many other commodities, continue to zigzag with an unclear trend. This could be, among others, due to the London Olympics that shifted the attention of many traders to this prime even. The price of gold edged up on Wednesday while silver slipped. The Euro an many other risk currencies continued to depreciate against the USD. On today's agenda: ECB Monthly Bulletin, American and Canadian Trade Balance reports, and U.S. Jobless Claims.

As seen, the chart presents the changes of normalized rates of precious metals in the last few weeks (normalized to 100 as of July 16th). As seen, during recent weeks gold and silver didn't move from their respective range.

American Trade Balance: according to the previous American trade balance report regarding May the goods and services deficit declined during the month to $48.7 billion.

U.S. Jobless Claims: in the latest update the jobless claims rose by 8k to 365,000; this upcoming weekly report may affect the U.S dollar and consequently commodities prices;

The Euro/USD declined on Wednesday by 0.27% to 1.2365. Alternately, other currencies including AUD and CAD appreciated on Wednesday against the USD. The linear correlation between gold and Euro is still strong: during the past month, the correlation between the gold and EURO/USD was 0.609 (daily percent changes). Therefore, if the Euro will continue to trade down, it could also pressure down precious metals.

The ongoing decline of the Euro during this week could continue to pressure down precious metals prices. Further, if other "risk currencies" will also depreciate against the USD, then precious metals rates may follow. The upcoming U.S reports including jobless claims and trade balance could signal the progress of the U.S economy and, in turn, affect not only the USD but also commodities prices. Finally, the Canadian trade balance report could affect the Canadian dollar that tends to be correlated with bullion.