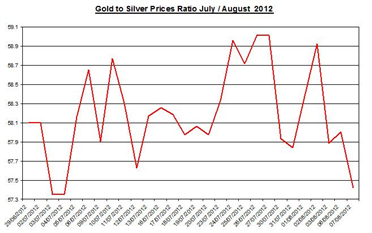 The price of gold changed direction and edged down on Tuesday after it had increased during the previous days. Silver, on the other hand, continued to trade up. The Euro an many other risk currencies depreciated against the USD. On today's agenda: Great Britain Inflation Report, American and German 10 year bond auctions, Australia Employment Report, Chinese CPI, BOJ's Monetary Policy Statement.

The ratio between the two precious metals fell on Tuesday to 57.42. During August the ratio edged down by 0.72% as gold slightly under-performed silver.

U.S 10 Year Bond Auction: the U.S government will issue another bond auction; in the previous bond auction, which was held at the second week of July, the rate was 1.46%;

Australia Employment Report: in the previous June report the rate of unemployment edged up to 5.2%; the number of employed decreased by 27,000 people; the number of unemployed increased by 7,200 during June compared with May‘s numbers. This report could affect the AUD;

BOJ –Monetary Policy Statement: Up to now, BOJ kept the interest rate unchanged at 0 to 0.1 percent. If the BOJ will introduce a new monetary stimulus plan, it might affect the Yen and commodities rates;

The Euro/ USD edged down on Tuesday by 0.02% to 1.2399. Further, other currencies including and Aussie dollar also depreciated on Tuesday against the USD by 0.14%. The linear relation between gold and the Euro remains strong: during the past month, the correlation between the gold and EURO/USD was 0.618 (daily percent changes). Therefore, if the Euro will continue to fall, it could also pressure down precious metals. Currently, the Euro/USD is declining.

Bullion rates started off the week with little movement and this low volatility may continue during the day. The upcoming auctions of Germany and U.S could offer some insight as to the market sentiment and the level of risk aversion in the financial markets. If the yields will continue to fall it could suggest other markets such as commodities and stocks will dwindle. If Bank of Japan will change its policy and introduce another stimulus plan, it could affect the forex markets, which, in turn could affect commodities markets. Finally, if the Euro and other "risk currencies" will continue to depreciate against the USD, then precious metals rates will also decline.